Review of: The Dreamer at the Pleasance Grand

Any shows that have the company Gecko attached to them have always been included in my pre-Fringe must-see list.  Their signature blend of exquisite movement sequences combined with an electric musicianship have made their past plays, Missing and Institute, utterly rave-worthy, and have quite worthily been the springboard for lauded national and international tours. The Dreamer, however, while still elegantly conceived and impeccably delivered, is the first time I have seen Gecko just fall short of the phenomenal standard they have set for themselves in previous productions. However, while the ‘signature’ style of the British company seems slightly at odds with the modern interpretation of a Shakespeare classic, it merges beautifully with Tang Xianzu’s The Peony Pavilion creating a heady and sumptuous (if rather odd) hour of theatre. 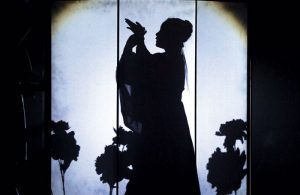 An adaptation of Shakespeare’s Midsummer Night’s Dream in association with Shanghai Dramatic Arts Centre, The Dreamer is a collaborative response to the Shakespeare Lives programme of last year, commemorating the 400th anniversary of the great poet’s death. And boy, does ol’ William live life to the full in this production. As the title may suggest, the emphasis of this particular piece changes from the ‘happenings’ and plot points of the original and instead focusses on one of the most complicated of Shakespeare’s characters – the ‘treat me like your spaniel’ Helena, somehow simultaneously emotional slave to the men around her and, yet, feisty feminist icon.

Being able to disengage from the rather rigid framework of the original plot points allows Gecko and the Shanghai Dramatic Arts Centre’s Helena to take time to physically grow into her own as a human being. One of the wonderful things about Gecko’s work is that they don’t feel the need to rush anything – magic love dust and sleeping with donkeys only appeared in the last twenty minutes of the entire show, giving the audience an entire 40 minutes to truly empathise with Helena’s predicament. The constant, industrial monotony of modern life grinds her down, she watches as someone she adores lavishes attention on her best friend while fairies scamper in green light through her dreams, cackling and salivating. Helena becomes so real, so completely and utterly worth every inch of our focus that all attention gets diverted from the others to land on her. In comparison, Lysander, Demetrius and Hermia are simply two-dimensional beings, there to aid our discovery of Helena’s character.

As ever, the design work of this piece is quite simply stunning. Huge plaudits must go to all technicians and designers attached to the show, as the amount of detail and fanatical timing requirements suggests almost god-like abilities from the technical team. Chris Swain’s lighting and his evocation of Puck is phenomenal, Dave Price’s music haunts the edges of the stage and almost seems at one with the fairies themselves (with a spellbinding violin performance by Ni Peiwen). The ‘real’ world outside just slips away, we enter a place where the beating of the music and the pulsing of the actors onstage are almost indistinguishable. Visually and aurally, it was glorious. Emotionally, Helena floored me. It is just a shame that the other characters were not given a chance to show this same depth, and thereby lift the production from ‘pretty incredible’ to ‘absolutely unforgettable’.