Ferocious and passionate piece, if pretty damn confusing at times.

I’ve never before seen a show where the title so accurately describes the experience within the auditorium. Derailed is an explosive beast – chaotic, off-the-rails and seemingly with no idea what the hell it actually wants to do. However, despite the frenetic nature of it, the friendliness and genuine passion of those performing creates a warmth in the room that many clockwork Fringe pieces are sorely lacking. 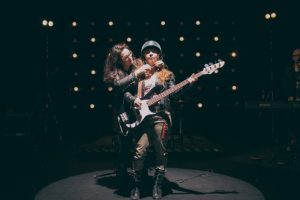 The piece is set around a leaving party, Patricia Rodriguez and Merce Ribot are being thrown out of the UK having lived there for around 7 years (I’m not completely sure). As sure, there is a very strong political bent to the show; however not one that I have ever seen before. Rodriguez wanders around the stage in her bra and a pig’s nose, demanding a fiver off the audience before announcing that she is, in fact, a depiction of ‘money’ itself. Ribot rebuts this dressed as the Dalai Lama before we have a rather lovely chat with Rodriguez’s father – why, I am not sure, but I think I enjoyed it?

The issue is that the whole thing feels like it was created when the performers were either drunk of stoned. Certain images could surely not be the product of a sober mind, and there are sections which completely obscure the intended message of the show rather than helping it. Have they made a difference, ask Rodriguez and Ribot. To be completely frank, probably not. The piece is neither bitingly original nor beautiful nor slick. However, what they have done is produce a carnivalesque production that demands your attention and creates the illusion that you know the two personally – sympathizing and in some ways empathizing with their anger and disappointment.

There is something festive about the bizarre nature of the piece, an unbridled energy that meanders around, sometimes taking the audience with it and sometimes not. The ferocity and passion of those performing is what carries us through, even if we are dragged along by the scruff of our necks for a large portion of the way.