Review of: Cream Tea and Incest

Playing at C Space, Surgeon’s Hall are the current adventures of a nincompoop, Eddie Strangler. This  romp is so anarchic, both in language and action that it almost raises a smile from time to time but in general this parody of Jeeves and Wooster style relationship palls.

Strangler has a loyal batman who is competent and knowing and who spends most of his time ensuring that any fix that Strangler gets into, can always be got of. At times Srangler is inspired by an idea or notion but is hopelessly unsure if an adventure means excitement or trouble, or if romance is beguiling or bewildering. If there is a wrong move to make or an inept attitude to take, Strangler will do it. So the bawdy comic fun begins with this dandy driving the action. It is played out in a truly beezer style with a brio  played for all its worth. 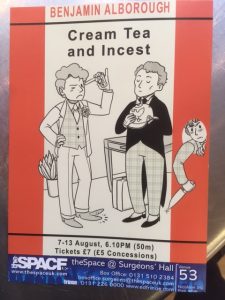 Written and performed by Benjamin Alborough, who delivers a performance big on confidence and light in content. He gabbles and gesticulates with a feverish passion, racing through jibes, jokes and comic business as deftly as any confidence trickster. Cues are rushed and responses anticipated as if it were a race to the finishing line. If you are after a range of schoolboy double entendres and bottom slapping action with incompetent young men then this may be right up your alley.

The piece covers romantic notions, perceived and misunderstood and the range of caricatures of toffs and ne’r do wells can raise a whimsical smile at points, when they are confused about love, death or  manners. However,  ultimately the delivery excludes the audience because the bumbling confused logic is played with such rapidity that the joke either wears thin or is over-played. Cardboard cutout props add to the sense of the comic book situation but are used with little comic effect.  Without judicious timing to build, anticipate and exploit a gag, much of the text goes for nothing other than leaves a wave hyper activity as props are thrown aside, flying off the stage with little humour.

The cast work hard to make the piece work and there were some people laughing but funny faces and voices tend to pall when not backed up by quality writing. As a comic once said, it is hard to be funny. This kind of Lord Snooty and his pals performance can be funny in Sixth Form common rooms but come on boys – get a grip!