Quiet and moving two-hander, but with a plotline that doesn't let the play shine as it should

Graeae’s Cosmic Scallies marks a very different type of piece from their latest tour, the rock musical Reasons To Be Cheerful. In this quiet two-hander, ambitious Dent returns home after the death of her mother to be confronted by soon-to-be father and her childhood friend, Shaun. A moving exploration of unlikely friendship, Cosmic Scallies leaves one with a strong sense of joie-de-vivre – but sadly this doesn’t translate into anything more profound. 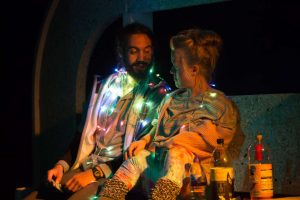 Small-town life under a microcosm, the show tends towards the plodding for the first twenty minutes. On this sort of tiny stage a long-ish journey to the shops comes across as rather awkward, as both Reuben Johnson and Rachel Denning stroll around the set trying their hardest not to make it look like they are going in circles. Very little actually happens – the pair have revealing conversations discussing childhood bullying and Dent’s mother – but even when Shaun lets slip his lost hope of being taken away from his addicted mother and being offered a home with Dent the dialogue seems curiously lacklustre. Conversational topics are brushed upon but never truly explored, leaving a season of surface satisfaction but a gap in terms of taking anything meaningful away.

It is the second half, where both are static in Dent’s living room, where the conversations move from the shallow and banal to the more interesting. The lack of movement works far better on the set than the previous pacing, and the audience can stop trying to suspend their disbelief re: Skelmersdale and can start focussing in on the people themselves. The sentiment is beautiful, however one cannot help wonder whether there might be a better plotline with which to explore the themes that Jackie Hagan is obviously so interested in. One can only go so far with a trip to the chemists.