I made the rather foolish mistake of seeing two circus shows back to back – meaning Pleasance’s Cirkopolis, from Cirque Éloize, running at the Edinburgh International Conference Centre, ended up rubbing shoulders with Circolombia’s Acéléré. Two international imports at the top of their game. It was difficult not to compare the two, both retrospectively and with the knowledge of having to then write up a review.

But to it – Cirkopolis, very much an ode to Metropolis, envisages a world of technological bureaucracy, where gears hang overhead and colour is sparse. Given that this is the case, the show is nothing short of a visual masterpiece, transforming the mundanity of the EICC’s Lennox Room into a thriving portrait of excitement and colour. Skill and wonder against the backdrop of the mundane – the show functions both within and outside of itself. We follow the protagonist, Ashley, chained to a desk of increasingly mounting papers and pressures, surrounded by grey-suited employees who seem to have strolled from the set of some early twentieth century film noire.

The magic, the subversion of the grey world in which Ashley lives, slowly creeps forth – tricks begin, sequences involve. Stabs of colour emerge from the monochrome. The world beneath the metropolis starts to show its true self – there is vibrancy here, playfulness, excitement. The show has essentially started with the same premise as Gecko’s Institute (also in terms of production and lighting design) and brought forth 75 minutes of visual splendour. 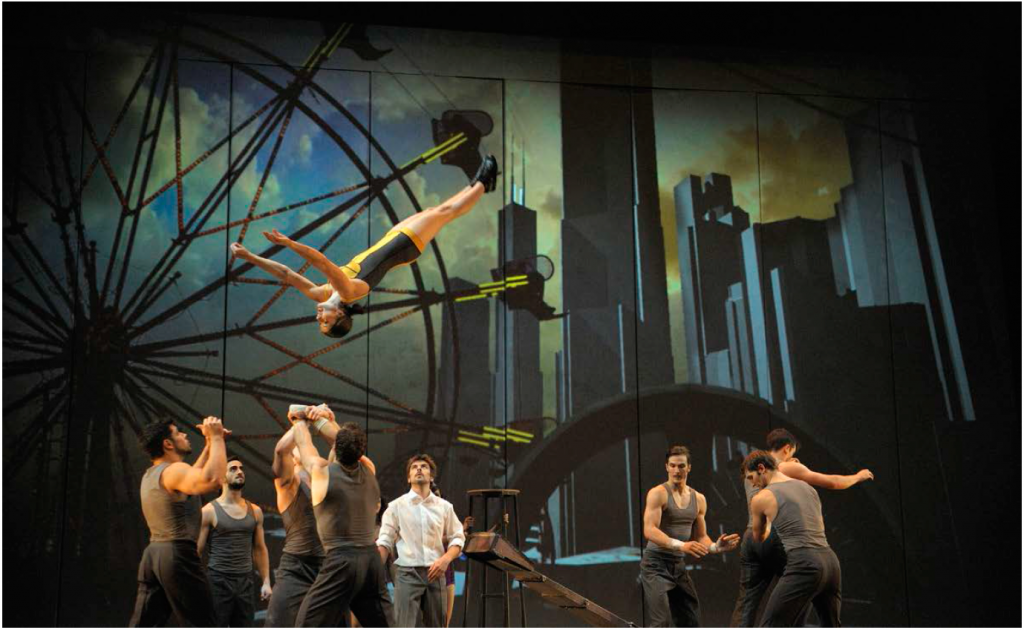 Some elements were less convincing – much of the humour didn’t seem to wash over the audience, while the end-on nature of the stage, exorbitantly wide, meant if more than one thing was drawing your attention then it could all be a bit boggling. I was inclined to move further away from the stage, particularly when seats at the front of the auditorium meant you couldn’t see any of the floor work occurring.

Many of these are practical issues that inhibit me from mentioning the vast wealth of talent occurring onstage – the physical prowess of the performers, as well as their desire to inhabit an overall story, kept the show running with a powerful speed. Cirque Éloize are talented – there’s no need for a blogger to verify this. One of the most liberating moments came when the show slowly stripped itself of its technological strictures – a tranquil sequence of a diabolo player performing in a park being the personal highlight. Special mention must also go to the varied yet stylised projection design.

From there anarchy breaks lose, we see unfettered colour, stunts, excitement. The drab dreariness of life can quickly transform into the random chaos of excitement – Cirque Éloize can even do it in under 70 minutes.