Review of: Bruce at the Underbelly

Bruce returns to the Fringe after a sell-out 2015 run, and remains as witty, warm and inventive as ever. 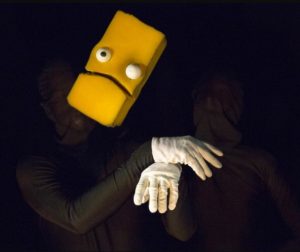 Expertly puppeteered by Tim Watts and Wyatt Nixon-Lloyd, Bruce is a yellow block of sponge with goggle eyes, and disembodied, white-gloved hands. But in their hands he is imbued with feeling and character, and invites pity, laughter and frustration from the audience, as a bumbling American who keeps getting it wrong.

The puppeteers do not only play Bruce, however; instead they create a whole host of fully-formed, distinct characters, who become instantly recognisable through quirks of their voices or physicality.  Particularly memorable were “One-Eyed Joe”, a bitter Russian who was mutilated by Bruce many years ago, and an old man who we later learn is Bruce too, giving sage advice to his younger self.

Which brings me to the plot. Sensational, action-packed and absolutely bonkers – probably not word ordinarily associated with a one-puppet show, and certainly not with a sponge. But Bruce takes us on an hour-long jaunt that thrusts us back and forward in time, constantly offering new angles on the milestone events of the protagonist’s life, before revealing that he has somehow managed to distort the “space-time continuum”.

We are taken through thirty years of Bruce’s life in the last five minutes of the show, always feeling a satisfying step ahead of the puppet, despite the pace of the show. If I had one criticism of the play, it’s that it has a few too many moments that feel like the end, as if the writers couldn’t quite agree on what made for the best ending. But the real strength of the show is in characterisation, rather than narrative. It was really quite remarkable to see how the same block of sponge could be given such a variety of identities, and the success of the show is a testament to the skill of the performers, both as puppeteers and as voice artists.