Protein’s Border Tales aims, over the course of 80 minute, to show its audiences what a multicultural Britain looks like, using dance, narrative, and music. We are introduced to seven individuals, all of whom (I think) live in the same street, and almost all of whom are immigrants from across the world.

The dance and movement in Border Tales is undeniably impeccable. The company combines different styles, inspired by the characters’ origins, and sets each to original music, mashing together cultures seamlessly. The choreography is imaginative and beautiful, performed with barely a slip from any of the cast – all of whom were equally strong, and I was saddened that there seemed to be much more focus on some of them than others. Every element of the stark design serves to highlight the best of the direction, and the creative team should be commended for their unity of vision. 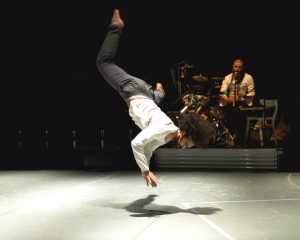 The frustration with Border Tales then is how much the show underestimates its audience – something I wouldn’t expect from Summerhall. The individual narratives told by the various actors are reductive and cliched, never feeling truly individual or even particularly educational. One of the central characters, Andy, was it seemed deliberately placed to ‘represent the racists’ of Britain, and his dialogue was especially clumsy. In one scene, painful not only for how awkward it was supposed to be, but how shockingly awkward and unrealistic the dialogue was, he had put on a party for his neighbours, all of whom were immigrants. When they all arrived, he went round the room and offered them what he considered ‘appropriate’ drinks – coconut water for the Nigerian Temitope, for example, and jasmine tea for Yuyu and Kenny (Chinese-Taiwanese, and Hong Kongese respectively). At the play’s climax, the rest of the characters then had their revenge on Andy, chasing him around the room and offering him tea and beer. This was discomforting for a number of reasons. Firstly, the production seemed to align Andy’s casual racism with the stereotyping of British people, and took the worrying decision of teaching him that his beliefs were wrong only by having them inverted on him. Secondly, the production took no interest in showing the nuance of racism, and the insidious way it can crop up – rather taking the easy route of remaining in cliche.

Overall then, while elements of Border Tales are inspired, the overall feeling is of disappointment. It is almost more frustrating when watching theatre that one knows could have been good, but hasn’t allowed itself to push beyond the easy into the genuinely profound.