Review of: The Catastrophists

An apocalyptically dark comedy for an age of uncertainty. 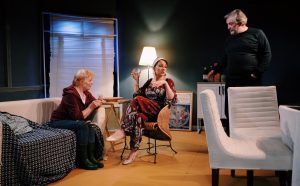 As Donald Trump faces off with North Korea over the threat of nuclear attack, it’s perhaps natural that some of us might be wondering what would happen in the event of an apocalyptic catastrophe. For Peter and Claudia in Jack Stanley’s new play Catastrophists, anticipating the apocalypse is a lifestyle. When middle-class, suburban couple Raf and Harry take up residence in the Cotswolds holiday home next to Peter and Claudia’s cultist commune, the consequences are explosive.

This new dark comedy from up-and-coming writer Stanley flows against the backdrop of Beth Colley’s excellent set (an instantly recognisable middle-class living room). The intimacy of the White Bear theatre lends itself perfectly to this domestic piece, and you almost feel you could help yourself to the flatbreads being consumed on stage.

Performances are strong from all four actors. Patsy Blower impresses as Claudia—initially appearing sweet and naïve, then increasingly creepy as the play progresses. Alexander Stutt’s effortless portrayal of jumper-wearing civil servant Harry is authentic and absorbing, and Edmund Dehn as the brash Peter gives the impression of faded grandeur and a man losing his way.

But the standout performance is given by Elizabeth Donnelly as the obnoxiously faux-posh, infuriatingly hypocritical Raf. Donnelly’s expert comic timing and facial expressions are the driving force of the play. When Raf reveals her insecurities and dissatisfaction with life (“I can’t remember ever being happy!”) Donnelly particularly excels, bringing an unexpected depth and pathos to a previously unlikeable character.

This sharp, intelligent tale of human hypocrisy and vulnerability will appeal to fans of Yazmina Rena’s God of Carnage. I feel that occasionally the writing is a little heavy-handed—I’m not sure how many times we need to be reminded of Raf’s tactless snobbery before it becomes excessive, and some jokes are needlessly repetitive. But overall this is an impressive piece of theatre that leaves the audience pondering—if the world ended tomorrow, would you be satisfied with the life you’ve lived?