Review of: Wind in the Willows

An exuberant new musical with great chorus work and some catchy songs, but essentially lacking an overarching concept that would give it depth and longevity.

This is an energetic and exuberant adaptation of Kenneth Grahame’s Edwardian bucolic tale with songs coming thick and fast and plenty of visual spectacle. Although my five-year-old seemed gripped, it lacked layers and subtlety to keep the grown-ups engaged. 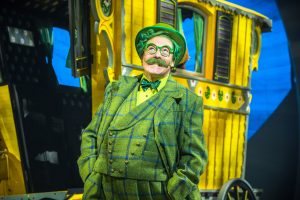 This new family musical, which has landed at the London Palladium for the summer, has been created by the dream team of Julian Fellowes (book), George Stiles (music) and Anthony Drewe (lyrics) – the trio behind Mary Poppins and Half a Sixpence – directed by Rachel Kavanaugh. However although there is some fantastic orchestration and amusing lyrics the book is rather thin and there is nothing particularly original in this reworking of the tale. Adult audience members long for some clever political reference, psychological undertone or deeper emotional connection to enrich the experience.

Young viewers will be satisfied by the attractive array of vehicles that parade across the stage, from pretty gypsy caravan to fast racing car, Victorian steam train and canal barge. They will also like the comedy policeman with their high-kneed chase of Toad. The show becomes much more enjoyable after the interval with Toad’s escape from prison as a washerwoman providing some much needed dramatic conflict.

We get some strong performances from the main characters, with Simon Lipkin playing for laughs in a laid-back Rat, Craig Mather as a preppy Mole, Gary Wilmot as an austere Badger and Neil McDermott as a wheeler-dealer Weasel – although all could go further in their animal characteristics. Rufus Hound puts everything he’s got into his excitable, bumptious Toad and everything perks up when he’s on stage. The ensemble is strong with some playful choreography from Aletta Collins – particularly memorable are the synchronised swimming otters. 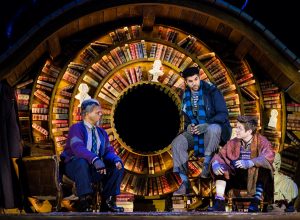 At the end of the night it is the vignettes that stick in the mind: a hilarious song from a porcupine family about the dangers of crossing the road (with lovely child performances) ‘Although we’re armed with many prickles / They’re no match for large ve-hic-les’; the choral wassail of the Mice and the Rocky-Horror-Picture-Show-esque Wild Wooders’ routine.

The simple, stylish set from Peter McKintosh looks beautiful and serves the production well as it elegantly transforms from river to burrow to Toad Hall and back again. The songs take you on a romp through musical history with each delivering up a new style from Gilbert and Sullivan, English choral tradition, Flanders and Swann and more contemporary styles. It’s enjoyable for the family, but you don’t really leave the theatre humming a particular tune.

This musical may not last in the West End (the current run at the Palladium is only 13 weeks long), but with its democratic distribution of lead roles, variety of music styles and potential for a large ensemble it is sure to be continually reimagined in schools and drama schools up and down the country.