Review of: Queen Anne at the Theatre Royal Haymarket

Although occasionally overwhelmed by historical exposition, 'Queen Anne' at the Theatre Royal Haymarket is a compelling depiction of one of our nation's unfamiliar monarchs.

After its critically acclaimed, sell-out season at the Swan Theatre in Stratford-upon-Avon, it was the natural progression of Helen Edmundson’s historical play Queen Anne to venture to the capital, where it now takes up residency for a thirteen week run at the Theatre Royal Haymarket. Depicting the relationship between the eponymous Anne and her lifelong confidant Sarah Churchill, Duchess of Malborough, Emma Cunniffe triumphantly returns to portray the pallid, yet powerful monarch, in a compelling political drama centred around two strong-willed women. To say that the mere thought of such a drama’s existence made me incredibly happy, would be a horrific understatement. 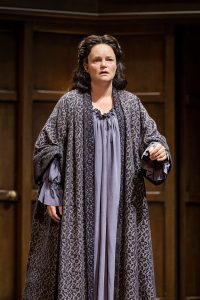 Intriguingly for a play which focuses so heavily on the satirists of the day portraying people of note in unthinkably personal situation, we first meet Anne, Princess of England, after the loss of her seventeenth child, with ragged hair and weeping sores splattered across her swollen legs. Cunniffe plays the poor princess stupendously well from the instance she appears, so much so that to see her in such a pitious and wretched state would make many doubt Anne’s strength to one day become Queen. In comparison, Romola Garai’s Sarah Churchill is a woman of scathing wit and social prowess, whose bright dresses and even brighter demeanour cast an immediate dichotomy between her and her anxious companion. However, it is the constant shift in their dynamic which instigates the drama, most notably as Anne craves desperately for the love of her friend, and it becomes uncertain as to whether they were ever truly friends at all. Many tell Sarah that she reciprocates Anne’s love, almost having to convince her that their affection exists, a notion that Sarah vehemently denies. While Anne continually clings onto her childhood friend, their relationship stays fairly of one-note, until the seeds of doubt begin to take root. Throughout the play, Cunniffe embodies Anne’s physicality with such precision, constantly hunched over, grasping her side as she copes through one malady after another; however, her mastery of the character lies in the fact that through this physicality, she projects the persona of a woman who steadily gains the courage of a fiercer sovereign. It is clear that Cunniffe has had time to nurture her portayal — she may have the body of a weak and feeble woman, but Anne truly has the heart and stomach of a Queen. 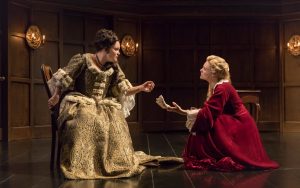 The butchering of historical quotations aside, the play does seem to suffer somewhat under the weight of its historical responsibility. For a Queen that is not well known by the general public, there is a certain requirement to include an amount of exposition; however, it is so oversaturated with an intense amount of political discourse, satirical references, and various historical events, that it becomes increasingly difficult to follow. Only after reading through the cast list of this production, did I realise that the characters of Jonathan Swift and Daniel Defoe, key literary figures of their time, were even in the play, probably lost somewhere within scenes of drunken lampooning. These scenes in particular, where pamphleteers and composers joined to provide a merry song and dance of explanation, were a great example of how context can be provided in an entertaining fashion. It is a shame, therefore, that they moved so quickly, and were swiftly replaced with longer scenes of expositional discussion. Perhaps if not so many battles or international relationships were focused on, we could linger on a few vital events and global figures, while leisurely enjoying these scenes that were not only useful in their information, but were also arguably historically accurate in their joviality.

It brings such joy to see a production with two incredibly powerful women at its helm, and with such a focus on how their relationship affected the political discourse of their time. The fact that a play like Queen Anne exists today is monumental in itself — it passes the Bechdel test with flying colours, and that is truly wonderful. Unfortunately, it is its duty to contextualisation that ultimately weighs it down, and distracts from the crux of the story. However, it cannot be denied that Edmundson’s play is an intelligent and emotive portrayal of our Stuart Queen. If our nation wasn’t aware of her before, Queen Anne at the Theatre Royal Haymarket should at least get audiences researching the fascinating life of this unfamiliar monarch.

Queen Anne will be continuing its run at the Theatre Royal Haymarket until 30th September 2017. Tickets can be purchased via the box office on 020 7930 8800, or via their website http://www.trh.co.uk/bookinglink/queen-anne/.

All other parts played by members of the company.