Double Double Act is a unique show running at the Unicorn – exploring how parental and child relationships can shift and alter when contextualised against the backdrop of stand-up comedy. Certainly one that piqued our interests – we spoke to the team behind the show here:

The old saying goes never work with children or animals – something wholeheartedly refuted by recent shows like Matilda or School of Rock – what do you think children can bring to theatre that adults simply cannot do?

True, terrifying unpredictability! At least when you make a decision not to work with stage school children. It was a decision we had to make, since that level of unpredictability – and authenticity – is always something we’re interested in when we make shows. The children are so completely themselves up on stage, even in a piece that is ultimately scripted. And they take very naturally to being absorbed in their task, be that a magic routine or a space-hopper chase or an interaction with a single audience member. They go hard, full commitment, and they perform in a way that it can be hard for anyone over the age of 10, with all the self-consciousness that comes with looming adulthood, to achieve.

What kind of expectations about the roles of adults and children are you aiming to challenge with the piece?

Firstly, that adults are serious and children are silly. Secondly, that the adults are always the responsible ones who look after the helpless children. And lastly – most importantly – the idea that adults are the fully formed version of what the children are becoming, and the sooner the children start behaving ‘properly’ or ‘well’ or ‘sensibly’ they will be somehow closer to completion as human beings. That’s quite an unspoken, but maybe quite prevalent assumption our society can make. We don’t think it rings true or leads to good things for children’s psychology, and we definitely know that we as the adults in the process are not anything like ‘fully-formed’! 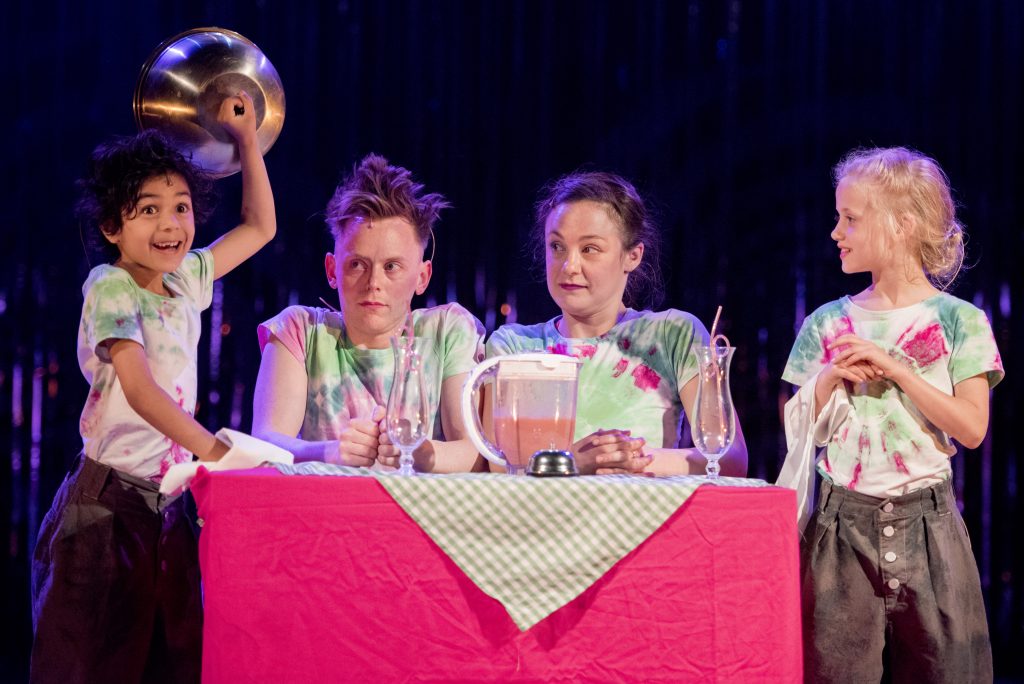 Why was the form of a stand-up routine chosen to examine these relationships? Does it offer you a context not available to more ‘conventional’ environments?

It offers a direct channel to the audience that Made In China always employs in every show. But most importantly for this particular one, it seemed a rich, apt starting point for a show that we knew from the very start would have 2 adults and 2 children in it. The comedy double act, from relatively unknown vaudeville duos like Shaw and Lee to the ultra-familiar pitter patter of Morecambe and Wise, was our jumping off point. And we realised that stand-ups, or comedies/jokes in general – always seek play with what’s permissable. Stand up comedians like Bill Hicks are famous for finding the hilarity and preposterousness in rules about what can and can’t be done/said. And that’s something the show engages with a lot. But the whole show isn’t stand up: it starts there and then goes bonkers in lots of directions…sometimes simultaneously!

Key to the premise is creating believable and intriguing relationships between the cast – what did you do to accomplish this?

We spent a long time letting relationships develop naturally through the process: lots of getting to know each other, playing, being idiots, exploring the things adults, children or all of us found funny or interesting or disturbing about the world, not being directed at every moment. Again, it’s not really about character for us – the relationships you see on stage are real, for the most part. Snippets of the text has been taken verbatim from workshops. Where there is ‘story’, it’s story that’s been built by the cast along with Tim (the only creator who’s not in the cast). The children are totally invested in all the action, and were there for the birth of almost all of it.

The Unicorn has become a national favourite for children’s theatre that can be just as (if not more-so) relevant to adults – what are you looking forward to most about performing at the venue?

Definitely testing the responses of different aged audience-members. From early previews,  primary school groups seem to be going wild for the show in the most brilliant way. But there’s lots in it for adults, and we mostly stood firm when it seemed like too much could end up being over children’s heads, which we’re glad about now. The opening few minutes for example will hopefully feel like it could be from any Made In China show to date, in terms of register, tone and unsettling playfulness. It’s great to be working at a theatre that is wary of talking down to children. There’s far too much dumbing down going on in general in the current risk-averse climate of lingering austerity, and we’ve hopefully made a show that provides its audience, adults and children alike, with a challenge. A completely silly, fun challenge –  but a challenge none the less.