Review of: Much Ado About Nothing at Shakespeare's Globe

A bombastic and superb delivery from Matthew Dunster, vying for the best outdoor experience of the summer.

There’s a point in Much Ado about a third of a way through the show that you know that director Matthew Dunster has pulled it off – decisively and brilliantly coupling Shakespeare with the early 20th century Mexican Revolution. As the masked flamenco dies down and Claudio’s betrothal arrives, the path to the final act feels neat, form-fitted. In retrospect it must be admitted that the match seemed as hard to pull off as that of the two central protagonists, yet nevertheless the show works with a euphoric glee, coasting through Shakespeare’s comedy with a breezy ease, lacing the text with newfound pertinence while able to glibly infuse it with more contemporary humour where necessary.

Credit must, first and foremost, go to the central performances from Beatriz Romilly and Matthew Needham, deftly constructing an innate chemistry while also trading the Bard’s famed barbs with wanton abandon. Though Needham’s Benedick certainly won out on the comedic front, it was Romilly’s nuanced sincerity, her barely restrained rage and overall construction of character that made for one of the most compelling Beatrices of recent memory.

Neither could have worked so fantastically without the framework that Dunster creates however, one ready to amplify and qualify Shakespeare’s passionate text, where men, nay, revolutionaries, are as quick to romance as they are to anger. We see the ugly side to Don Pedro’s honour, the patriarchal abandonment of Leonato, just as we feel Hero’s anguish in being so publicly scorned. The surface emotion is, in this context, legitimised.

An inspired choice from Dunster therefore, but one that could only work with completely cohesion among the creative team – the puppetry was a fantastic touch, characters sometimes both symbolically and physically sat atop their high horses in judgement. The naturalism of these stallions, down to the characteristic stomping of hooves, was sublime. Music from James Maloney equally suffused the show with emotional pangs and consistent rhythm, a carnival for the senses to match the turbulence of the narrative. Set design, predominantly in the form of a hulking rail wagon, was a nicely versatile choice, Anna Fleischle transforming the Globe’s stage into a vast, liminal, space, either in the midst of or recently finishing a long journey. 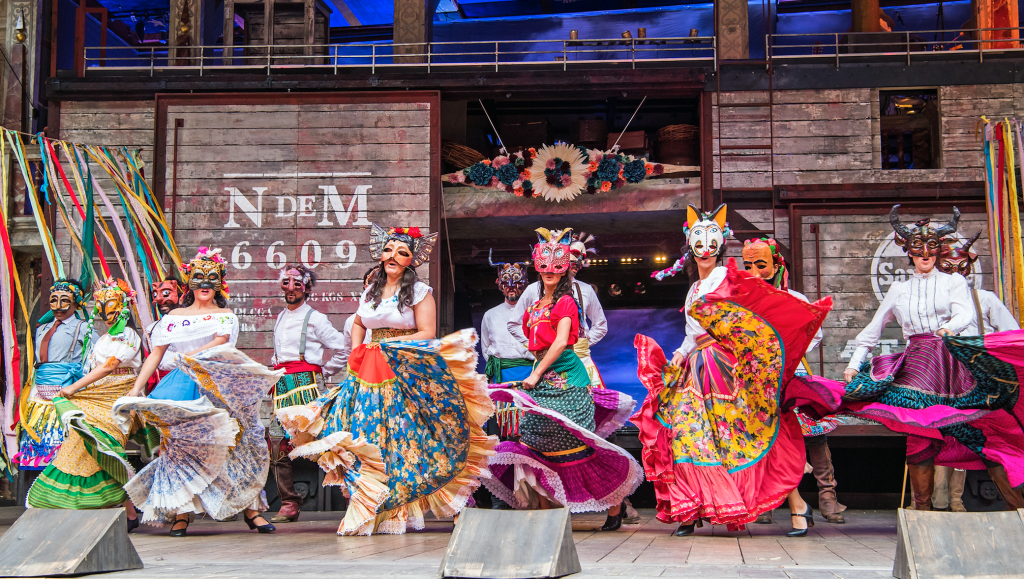 And this was a dangerous production at that – guns brandished, friends threatening one another – the martial context is rarely forgotten when characters wear sashes and keep their bolsters close. A Mexico in flux, still in the midst of a tempestuous birth.

The decision to transform Don Juan into Don Juana equally makes a startling amount of sense for any production of Much Ado – a two dimensional vilified figure now scorned and resentful of the fact that she, by her very nature (‘I cannot hide what I am’), is restrained:

‘I am trusted with a muzzle and enfranchised with a clog; therefore I  have decreed not to sing in my cage.’

It almost feels too perfect to work – a shame therefore that Shakespeare has the character whisked away into invisibility for the final act.

The play had a few teething issues – the use of regional accents could at times feel slightly forced, while the miscommunication gag between English and American dialects wore slightly thin by the fourth or fifth scene.

But this Much Ado ends with a politically pertinent punch, a defiant exclamation – Mexico is as legitimate a place for Shakespeare as anywhere else, and its history and stories should always be told. Hopefully a few specific Americans could learn a thing or two from this green white and red defiance. If this is the performance to round of Emma Rice’s Summer of Love (and her tenure at the Globe’s outdoor space) come October, it is a wonderful closing instalment.