Review of: Lady Day at Emerson's Bar and Grill

There seems to be something intoxicating about the decay of an icon. Watching a person recognisable and awe-inspiring wilt to ‘merely human’ and then even further is a trope seen not only in various plays and literature, but upheld (and even championed) by publications like The Daily Mail and The Sun. As such, there is something rather voyeuristic and, dare I say, even slightly sadistic about Lanie Robertson’s Lady Day at Emerson’s Bar and Grill. A specific choice is made to show Billie Holiday at her worst – necking back tumblers of straight alcohol onstage, heading off an hour in to shoot up on heroine, leaving her accompanist alone onstage to deal with the bemused crowd. 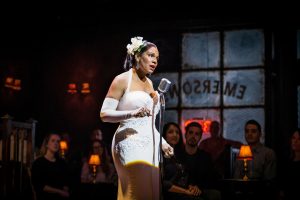 It is hard to imagine how anyone except the by-now legendary Audra McDonald would be able to capture Billie Holiday’s signature croon past the peak of its greatness. McDonald’s voice is mesmerizing, changed from the deep, glorious soprano we usually associate with her name to something that hits you in the back of the throat, a tender huskiness that made Holiday so iconic. She is utterly glorious, creating a sense of intimacy and personal connection onstage that is very rare in the large West End venues. Praise for this feat must also go to set designer Christopher Oram, whose bar spreads beyond the confines of the stage into the auditorium, muddying the line between performance and spectator. Audience members sit around small cabaret-esque tables on the stage itself, only a couple of metres from McDonald, instantly creating a sense of authenticity which is so often lacking due to the size and grandeur of large London venues

Lady Day at Emerson’s Bar and Grill is very much a one-woman performance. When watching, one becomes uncomfortably aware of the fact that a subconscious part of the audience is actually egging her on – after all, breakdowns on the stage are much more interesting than someone stone-cold sober and in complete control of their situation. The pathos is intense, but the main feeling throughout is one of pity rather than any kind of jubilation. We are there watching a woman who has been beaten down by the world, portrayed for our entertainment. While it does make us reconsider our own role in her downfall (a significant percentage of the audience were white, making Holiday’s story about the racism she faced when touring all the more ironic), it also encourages us to wallow in it. The sections where McDonald interacted with her accompanist, a wonderful Shelton Becton as Jimmy Powers, were therefore some of the most successful, showing a kindness which was noticeably absent from the rest of the piece.

This is not comfortable viewing, yet, I am not sure it should be. As much as I would have loved to see a Billie Holiday in her prime (as much out of respect for the singer as for any entertainment value), I do understand Robertson’s choice. A worn-down woman nearing the end of her life can tell us much more about the society she battled than one coasting along on a wave of adoration. The cruelty in the written portrayal, along with McDonald’s devastating voice, was what compelled us.