Review of: La Strada at The Other Palace

La Strada has been on something of a long and winding road since debuting over four months ago at Coventry’s Belgrade. 16 weeks of venues, audiences and travelling can sometimes sap a show of its vivacity and energetic poise but punters may be relieved to hear that isn’t the case. Sally Cookson and her troupe of performers have spun something theatrically magical out of Fellini’s classic 1954 film, reinterpreting and invigorating the narrative in ways that make it as bright and fresh as ever.

A tricky task for a show set in an Italy steeped in historical significance. The post-war years were not kind to the country, forced to rebuild and suffer widespread poverty after the fall-out of the 1940s. Entirely at odds with the romanticised country we read about in Forster or James, Fellini brings these issues to front and centre in the film, a feat perhaps less plausible in the stage adaptation, where Cookson’s ramshackle set spares audiences the full impact of the desolate landscapes of the cinema. Instead the hardships reflect themselves in character actions, laced with desperation, malice or a Bohemian-esque squalor.

We follow Gelsomina, a young girl sold by her mother to touring strongman and serial-beater Zampanò, who then embarks on a cross country tour through a dilapidated Italy in his trusty motorbike. Zampanò drinks away their money, antagonises individuals and, to top it off, takes advantage of the charity of others. The amoral heart of a desolate environment. On the other end of the spectrum we get the exuberant Fool (you can read our interview with actor Bart Soroczynski from last week too about the role), a faintly angelic presence committed to bringing joy to Gelsomina’s increasingly disheartening life (often through a series of impromptu circus skills)

They say shows can often be far more about the journey than the destination, and the same certainly seems true for La Strada – the highs come during fleeting weddings, circus carnivals and general merriment, brief sprinkles of joy in the murky, ad hoc world that Cookson has constructed. Less melancholic than Jane Eyre while more sedate than Peter Pan, Cookson knows what she wants from this story. At times the road does feel unclear, or unmapped, but this almost feels inevitably given the Cookson-esque form employed. 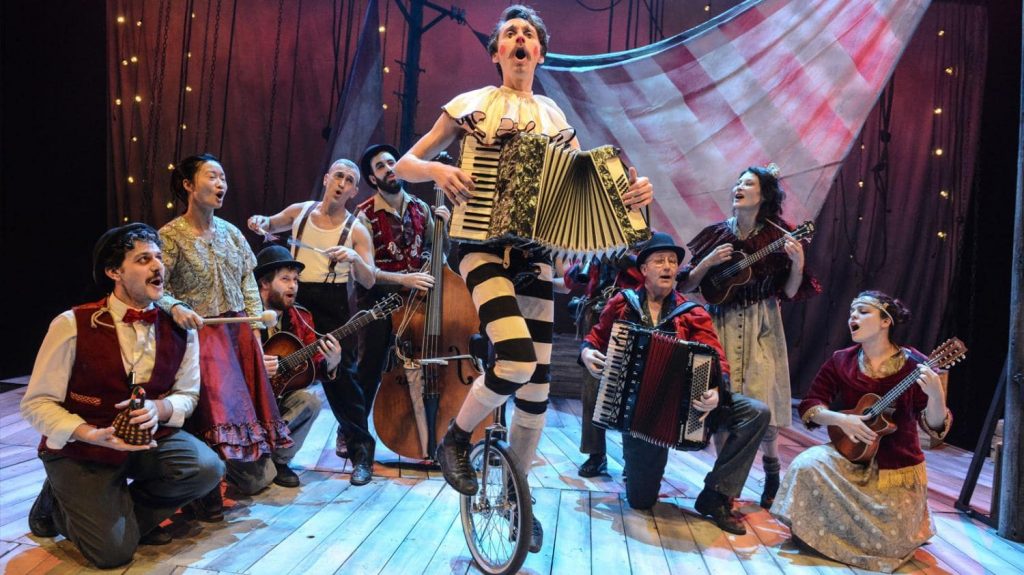 On the acting side of things, Audrey Brisson is the ideal stand-in for the Cookson female lead (Madeleine Worrall has certainly made the position her own in recent years), a naif forced to learn life lessons in unusual circumstances. Brisson’s key strength lies in her physicality, a near ungainly meandering that displays, in one fell swoop, a sense of youth, trepidation, frustration, anguish and isolation. Her moments dancing, playing instruments (a personal highlight being her hijacking the double bass in the background during one of the songs) were such a welcome relief from this stunted awkwardness.

The music itself stands out here – the ‘musicians’ consistently an intrinsic part of constructing the tone and world of La Strada. Benji Bower has brought a rambunctious and unapologetic freneticism to the score, always groovy, percussion led and replete with string instruments. I’d go again just to be once more part of the wedding’s festivities midway through the first act. While the rough edges may stretch to both conceptual and execution levels, this was ensemble theatre at its finest.