Review of: Combustion at the Arcola Theatre

Khan is fast emerging as the voice (or certainly a voice) of his generation of Muslims, but this play has a resounding relevance for our society as a whole.

In the wake of the attacks on Manchester and London, and, more pertinently to Combustion, the recent airing of the BBC’s “Three Girls”, Asif Khan’s exploration of young British Muslims grappling with their identities could not be more timely. It’s brave, outspoken theatre, that perhaps deserved a bigger audience than it had at the Arcola last night.

Shaz (Beruce Khan) is a mechanic who has supported his family since the death of his father. His garage takes centre-stage, where he is joined by the unpredictable, fiery Ali (Rez Kempton), and Faisal (Mitesh Soni), whose simple, friendly character provides many of the laughs as Khan tackles this difficult subject with comedy.  The play takes as its focus a fictional example of a story we all read about – a pre-teen white girl, known initially only as “Girl T”, has been raped by an ever-widening circle of Muslim men. Bradford is divided by the revelations. An EDL march is organised outside a mosque, and the Muslim community, made up, as we see, of so many individuals with diverse outlooks and beliefs, is left reeling.

It took a while for me to get into Combustion; I was put off initially by the debate between Shaz and Ali as to what the Muslim response should be to both the paedophilia and the islamophobia that have come to the surface in their town. Shaz wants a quiet life, and for Muslims to stop “feeding into the hands of Tommy Powell.” Ali vows to “go jihad on them…bomb all the racist cunts.” The argument makes for a brave opening to the show, but for me it was too early, too trite, too shouty. Khan is much more subtle in his criticism of both the white and Asian characters for their hypocrisy when it comes to misogyny – each side points the finger whilst failing to address issues in their own communities. 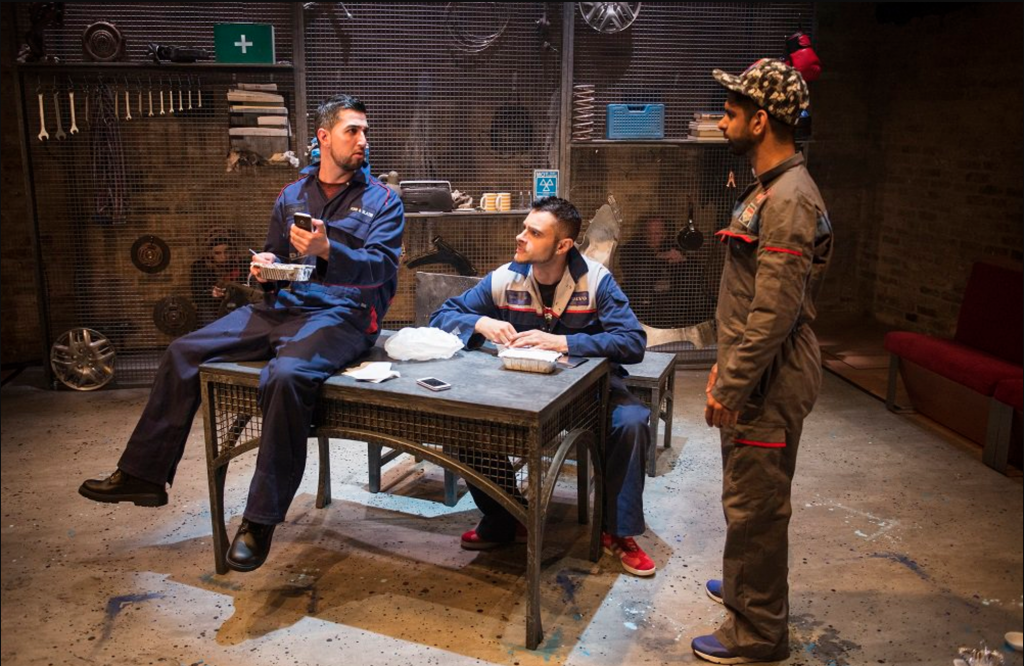 The script really came to life, however, with the appearance of Samina (Shireen Farkhoy), a peace activist trying to heal divisions in Bradford, despite living under her brother’s somewhat overprotective rule. The way she talks about Islam is smart, insightful, and loving, and Farkhoy plays her with a passion that makes the friendship she strikes up with ex-EDL member Andy (Nigel Hastings) not only plausible, but riveting. Their relationship in the end is what drives the show, and leaves the audience with an overwhelming feeling of hope at the end, as we are left with the image of Samina, standing in front of her bright green “Bradford for Peace” banner.

In terms of staging, the garage is represented by a sparse set, consisting of a metal grill on which all the tools of a mechanic’s trade are hung, and the grey tables and benches that stand cleverly for cars in the opening scene are rearranged to create the various other locations. I found at times that the constant rearranging of furniture, and the presence of the offstage characters behind the grill, prevented me from being fully absorbed by the action. I also found the staging a little dated and distracting at times – all those tableaus felt out of sync with Khan’s extremely current script.

Overall, I think this play, though a little shrill and shouty in places, is a much needed tonic after these past few weeks, and a really significant insight into a social group that is often seen as homogenous block. Khan is fast emerging as the voice (or certainly a voice) of his generation of Muslims, but this play has a resounding relevance for our society as a whole.