Review of: Stormy: The Life of Lena Horne

A promising first outing for a one woman musical about one of Hollywood's greatest African American actresses.

Clarke Peters, the creator ‘Five Guys Named Mo’ brings his creative direction to the world première of this new project written by and starring Camilla Beeput. This one-woman musical biography directed by Maxwell Golden brings to the stage the life and work of Hollywood Golden Age actress and singer Lena Horne, a woman who shattered the stereotypes of the portrayal of black characters on screen.  In the smoke hazed auditorium, the sultry tones emanating from the five piece band compliment Beeput’s delivery of her opening speech as she emerges from a spotlight, androgynously dressed in a black suit to greet the audience as Lena; the phrase “I am a black woman, I am like no one else” is certainly a memorable one. The power behind the five piece band unfortunately dominated her performance at times in the space of the Norwich Playhouse. The use of multimedia interaction might have helped upscale the production which currently plays out for an intimate cabaret setting, or it needs the space to match its current set up. 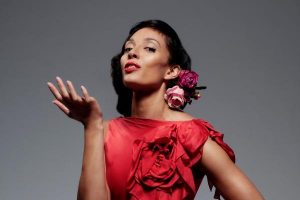 © Stormy: The Life of Lena Horne

The characters in Lena’s life that Beeput portrayed had the danger of being caricatured at times. It works in a couple of instances to bring out the humour, like the New York club promoters for example but for the others, it made the hardships Lena faced with the people in her life less meaningfully engaged with. One of the most authentic portrayals was the Grandmother, with such wise and soft speaking tones captured beautifully by Beeput. There are voices in Lena’s head which intensify and pull her in different directions as she gathers words of positivity and negativity from the people around her which was cleverly built upon throughout the show to demonstrate the identity struggle faced by Lena as black woman trying to find a sense of belonging. 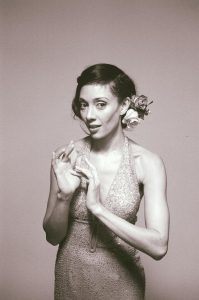 The song ‘Stormy Weather’ was highly anticipated and its appearance does not disappoint as Beeput’s stunning vocals capture Lena’s essence beautifully. It would be great to hear further development of the original songs which were a rich fusion of genres from musical and jazz through to rap. It was a shame that a couple of them were short samplings as they have great potential for being showstoppers, ‘Stand Up’ and the Hollywood number in particular were very catchy. The dramatic lighting by Charlie Morgan Jones really emphasises Craig Turbyfield’s striking choreography throughout and for me, it was the Harlem Cotton Club scene where it all came together. That scene was at its best for being so visually and musically evocative of the time, particularly when Beeput brought Cab Calloway to life with a charming blend of humour and showmanship. I must give particular credit to Sheila Maurice-Grey who played such a moving blues solo on the trumpet during Beeput’s heightened piece of narrative, they complimented each other well to deliver it so poetically. The show leaves you on a musical high and a powerful message which calls out privilege. While there is room for development with certain characters and the scale of,  it certain packs a punch musically and I look forward to following its journey.

Stormy: The Life of Lena Horne will be continuing its run at the Komedia, Bath Festival from Wednesday 24th May for one night only. You can book your tickets from their website http://bathfestivals.org.uk/blog/event/stormy-the-life-of-lena-horne/ or through their box office on 01225 463362

Starring and Written by Camilla Beeput