Flabbergast Theatre are a phenomenon of the Fringe theatre scene. They are the creators of the cult hit Boris & Sergey, a foulmouthed Balkan puppet double act who crossed almost every boundary imaginable, spawning a fanatical following and several sequels along the way. Their roster was soon joined by the sublime silent solo clown show Tatterdemalion, and then a boistrous bouffon double act named Skrimshanks. Flabbergast brought their bus/pop-up-venue (move aside, the Blundabus) to the Edinburgh Fringe in 2016, marking a shift in the company’s role from Fringe favourites to godfathers of theatrical oddities everywhere.

This May, Flabbergast are bringing Tatterdemalion and Boris & Sergey (in Boris and Sergey’s Astonishing Freakatorium) to the Wilton’s Music Hall. To celebrate, Theatre Bubble spoke to Artistic Director (and Tatterdemalion performer) Henry Maynard to hear all about Flabbergast’s future and being “too niche” for Channel 4. 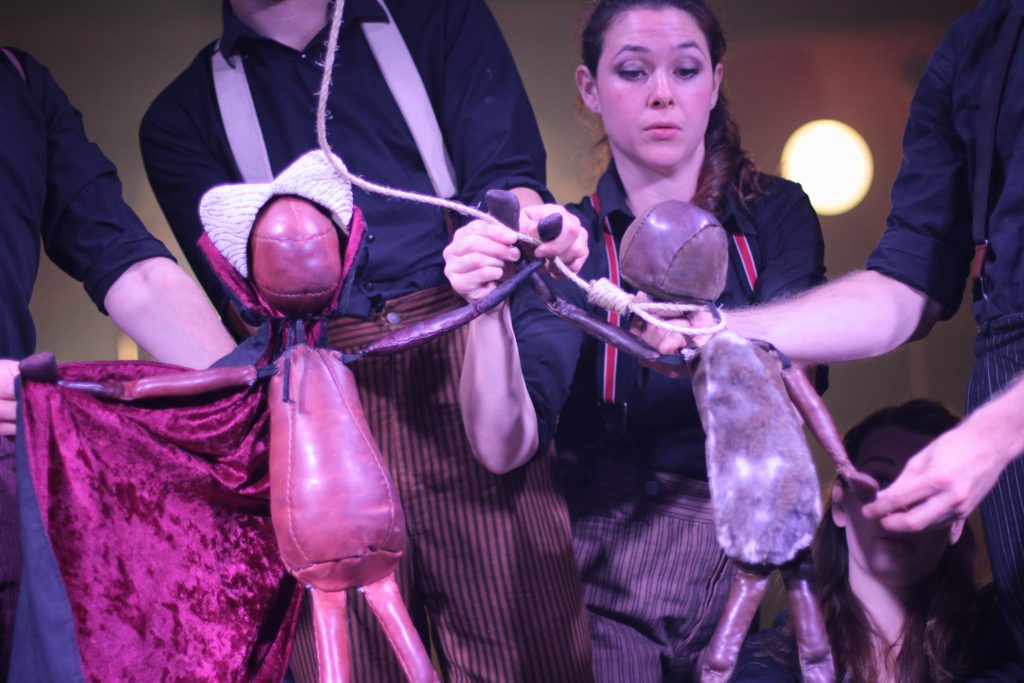 Boris and Sergey in action

Theatre Bubble: What’s the key to making “engaging and sweaty” theatre?
Henry Maynard: Run around a lot and ask people to marry you…
It’s surprising how sweaty you get whilst only moving a few feet in either direction, because of the intensity of the performance and the micro-movements involved in bringing Boris & Sergey to life. In our other shows, like Tatterdemalion, you have a performer who can’t speak and therefore must  communicate everything physically which leads inevitably to a little perspiration. I tend to have a preference for the type of work that Brecht espoused rather than the Stanislavkian fourth wall approach, we feel that when we are at the theatre, the audience is as responsible for the connection as we are. It’s Live and alive, it’s wonderful and we are all in a room together having an experience.

TB: Bringing the Omnitorium to the Assembly at the Edinburgh Fringe last year was a significant step for the company. It seems to me that Flabbergast’s success is bringing it to the forefront of a movement championing alternative performance within the UK’s theatre scene – the Omnitorium, for example, hosted the London Clown Festival last year. Do you see Flabbergast becoming more of a home for likeminded artists?
HM: The Omnitorium is very much a part of the Flabbergast world. It came about after I was talking to the performers of Boris & Sergey’s Astonishing Freakatorium after a performance on the Isle of Wight. I had mentioned the possibility of a touring venue that could pack into a bus and when I saw the light in the eyes of my colleagues I realised that I would have to try it even if it was a complete disaster.
The London Clown Festival was set up partly to provide the grassroots entry for practitioners of clown and physical theatre that we felt was sadly lacking from the International Mime Festival. Don’t get me wrong – it is a wonderful festival full of the best performers but you are discounted from performing in it if you have ever performed the piece in London before. When your work relies on audience interactions and feedback, not performing in London is very hard to do if you are based in London, I’d love to speak to them about how that might be addressed, even if it were a collaborative effort.
I want the Omnitorium in Edinburgh to become a hub for Clown, Physical Theatre, Commedia Dell’arte and Puppetry-influenced work and I’m very excited by the programme that we have put together with Assembly this year in Edinburgh.

TB: Are Boris and Sergey going to live forever?
HM: Boris & Sergey have a life of their own – they have now performed in five full-length shows and have a new one for Edinburgh 2017 called Boris & Sergey’s One Man Extravaganza. I’d love to do a sitcom with them but Channel 4 said that we were ‘too niche’ and if we are too niche for Channel 4 we may be too niche for everyone else… I’ll just have to wait for the lottery win so that I can shoot the pilot! We do have a YouTube channel and early on we started shooting some great high quality videos such as ‘Unrequited Love’ but there isn’t enough money or time to do everything we want to do sadly.

I think we may take a break on new shows for them after this Edinburgh run to look at other ideas. But they won’t be gone for ever…

TB: The company has always excelled at creating epic small-scale theatre – with much of Boris and Sergey’s comedy drawn from the physical gymnastics required for two teams of puppeteers to animate a double act. Is this focus on intimate experiences likely to change?
HM: We love intimate experiences and even in larger venues such as Wilton’s Music Hall we strive to maintain that intimacy. We have several projects bubbling away on the back burner… I’d like to produce a Shakespeare which incorporates our approach to Clowning, Puppetry and Physical theatre and our sensibilities with regard to tone, mood, bathos and pathos. I have also directed a number of site specific shows and would like to do one under the Flabbergast banner – it’s about finding the right theatre to collaborate. Also, I’d like to do a follow up to Tatterdemalion…

TB: Do you believe people’s perceptions of puppetry as an adult medium have changed significantly since you began creating work as a company in 2010?
HM: I think so yes, there is still a stigma attached but more and more people are seeing puppetry in theatre and being astounded and amazed (…flabbergasted) by the results. War Horse certainly helped and has spawned a number of other companies that are going on to work all over the country with brilliant theatres and productions. Puppetry is always going to have a place in children’s theatre but puppetry is certainly enjoying a renaissance in British theatre at the moment.