Review of: The Lottery

A woefully unfunny exploration of political systems just about saved by some fine acting.

The description of ‘Lottery’ poses as a rather intriguing concept – what would happen, if, instead of electing Prime Ministers, a lottery system meant a random member of the public was picked to run the country every time a new PM was needed? Now, while this might sound pretty appetizing considering the current political climate, Fictive’s theatre piece does very little to actually explore what could be a fascinating theme with any sort of subtlety and depth. 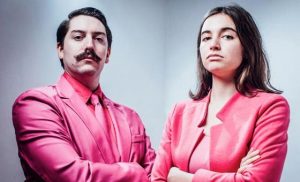 Sadly, the whole play just comes across as confused. Scattered around the self-named ‘comedy’ are various meta-theatrical jokes including a wildly self-aware, haze-filled ‘flashback’ (ft. a rather dishelleved, plastic, yellow wig and a baby doll), a bizarre couple of moments where one of the characters seems to acknowledge the theatricality of it all in a way which just undermines the scene he’s currently in, and an audience member forced into said plastic yellow wig before being forgotten about for the remainder of the piece. All these gags and more tend to land a couple of feet away from the increasingly bemused audience who struggle to locate the genuinely interesting concept promised at the start of the piece within the hubbub onstage. Yes, it is heartfelt and enthusiastic, but the comedy being thrown around with all the aim and precision of a 19th century blunderbuss tended to confuse rather than enthrall.

However, the biggest shame is that the three actors trying to make sense of this bizarre piece were actually, recognisably, very good. Ava Pickett and Elliott Bornemann’s first interaction on a bus is beautiful, Pickett especially has to be commended for grappling sympathetically with a character I wanted to slap the entire way through. Rhys Tees was suitably slimy as Pickett’s right-wing manipulator, however ended up in a shouting match so often during his scenes that any kind of character development was sadly obscured. This is an observation that can be extended to all of the characters – after having set them within such an interesting world, Simon Paris’s writing tends to lean towards crude, ending up with two people yelling at each other onstage rather than any layered kind of conversation. His dialogue is, however, beautifully natural and, with Pickett’s character especially, manages to encapsulate a rotten and corrupt world, but doesn’t lead towards anything. There is no reason for anyone in the audience to sympathize with any of the people portrayed onstage, and as such we end up just not caring.

The concept Paris based his script on could have been so rich, subtle, and a fantastic way to explore the effect power has on individuals. With the last few, turbulent political years as a backdrop, this theme is stingingly relevant and I had high hopes for the play. However, the entire piece ended up succumbing to the draw of attempting easy laughs, thereby undermining the very situation they were trying to explore and producing a confused muddle instead of the satirical piece one might expect from such an excellent concept.