Review of: Bound at the Ovalhouse

Put together by ‘Justice in Motion’, the physical theatre performance unveils three stories of hope and desolation in an imaginative and articulated way

Fusing dance and music, monologues and dialogues, Bound speaks of dreams crushed by cruelty and of de-humanising circumstances that all too often are more real than we think. Put together by ‘Justice in Motion’, the physical theatre performance unveils stories of hope and desolation in an imaginative and articulated way.

At the core of the show are the tales of three similarly “bound” characters: a prostitute (Anja Meinhardt), a Spanish builder (Daniel Rejano), and a cleaner (Emma Webb). Their paths cross in the same hotel, making them share the same experience of isolation and dejection that characterises ‘human trafficking’.

Artistic director as well as performer, Meinhardt shines with remarkable dance and mime abilities. She offers the audience moments of genuine sweetness, swiftly followed by flashes of painful, even suffocating intensity and physicality. Rejano also proves intensely communicative, and I felt he deserved more space in the performance. The moments where we learn about him as a character are only a handful, and he’s only allowed one, brief (if fervent) monologue in Spanish. In a three-man show, especially such a creatively crafted one, it would have been fascinating to see alternative ways to tell his story. There was a bit of unbalance favouring Meinhardt over the last two characters, which impacted the overall equilibrium of the show. The trio is completed by Webb as the garrulous, naive cleaner. From the very beginning, she gets the audience’s sympathy and approval through her humorous interpretation, which proves all the more excruciating as her story unfolds. 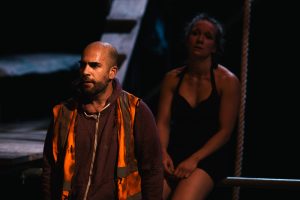 The small, witty devices the show employs are one of the performance’s main strengths. The usage of sand is a wonderful touch, conveying the impalpability and frailty of broken dreams. Similarly, the video projection on a shirt is revelatory in its simplicity, presenting a character’s memories in an intimate and at the same time visually manifest way. Even the spoken word scattered through the show has a visual dimension to it. The factual words of scriptwriter Gareth Cook describe simple situations, but are delivered with pathos and, sometimes, the whole body. This, more than anything else, hammered home the idea of human trafficking as a dreadful experience encompassing all aspects of a human being.

A brilliant conglomerate of many art-forms, at traits the show fails to be “bound” together in a cohesive way. While some moments and transitions result almost inspirational (going from dialogue, to playing, to drawing with sand, to dancing), in other cases the performance develops through very (too?) rapid shifts. Meaningful as this might have been, possibly making a statement about the swings in the life of the characters, it disconnected the audience more than it made us feel included. 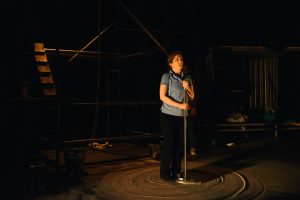 An element that does bring unity to the show, however, and deserves kudos in its own right, is the dynamic set by Simon Dormon. The way it creates connections between the spaces where the three characters operate is cleverly exploited by the cast with aerial circus, dance on the floor, climbing, jumping (and even falling). I feel that a similar (metaphorical) cohesiveness would have been welcomed in the structure and development of the performance as a whole.

By the end (deliberately, and slightly frustratingly, left open), the audience can say to have been through a journey of hope and resignation, of fear and courage, artfully portrayed with insightful media.

Bound runs at the Ovalhouse until Saturday 13th May, with performances at 19.30. Tickets can be purchased on their website or by calling their box office at 020 7582 7680.