Review of: This Beautiful Future at the Yard Theatre

Rita Kalnejais’s script perfectly captures the transcendental nature of first love, and lost love, and made the audience sing (not figuratively).

It’s 1944, and Elodie and Otto are teenagers in love. In the morning he’ll leave to invade Britain, but when he’s done with that he’ll come back to her and they’ll get married and raise children who speak French and German, and will live out their “beautiful future” in a world where, according to Otto, everyone will be “of the same race”, sharing the same beliefs. Except it’s 1944, and anyone in the audience with any knowledge of history knows that that’s not how the story will end.

What we therefore see is an exquisite tension between this night, in which the future beckons brightly to the two giddy youngsters, and the looming dread that hangs over it, with bombs being dropped all around them as the German retreat begins.

Rita Kalnejais’s script perfectly captures this microcosm of young love. The language used by Elodie and Otto does not belong in the 1940s, and instead their words and behaviour around each other might be seen in any awkward teenage romance today. Far from being jarring, this anachronistic style serves to highlight the timelessness of their feelings for each other, which transcends the wartime setting.

We feel an instant rapport for these two even as we recognise their foolishness. Hannah Millward’s Elodie is all restless, excited energy, while Bradley Hall manages to play a Nazi soldier with a shyness that encourages real warmth for him. He asks himself earnestly, “What would Mr Hitler do?”, and it seems almost cute. But Kalnejais won’t allow us to get too swept away: Otto has killed today, and he isn’t sorry. Elodie has slept with a man who killed her friends, and she, too, is not sorry. Under Jay Miller’s skilful direction, this seeming discrepancy became acceptable – we could be alienated from them one minute, and entirely wrapped up in their relationship the next.

The set design by Cécile Trémolières works in perfect synergy with Kalnejais’s script, synthesising the period setting with modern technology in her mural of a French village shot through with an LED screen. The screen at times offers instructions to the audience, but is mainly used to display song lyrics sung by two older performers, Alwyne Taylor and Paul Haley, from karaoke booths at the sides of the stage, which clash in all the right ways with the grassy haven that the younger couple occupy in the centre. 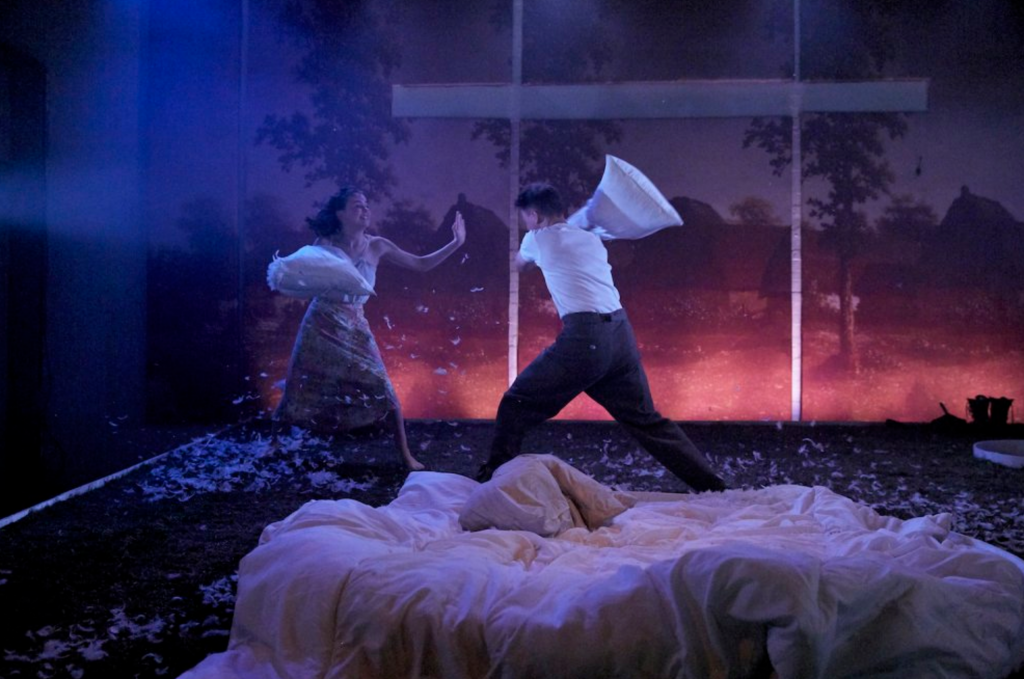 At first I struggled to see the connection between them and the main characters, but as the play progressed, I began to see it as an additional layer linked thematically rather than narratively to them. They sang about lost love, and spoke about their regrets – this is what the “future” looks like in retrospect. They set up the aforementioned Adele moment by singing the first verse of “Someone Like You”, before the screen narrated, “audience sings…” This was met with a laugh, but we did it, even as we were told, “They make love for the first time.” Again we laughed, but then we stopped laughing, because the song reminded us of the bittersweet nature of lost love, and then nothing about the moment seemed corny at all.

Towards the end of the play, Taylor and Haley invade the stage space, and begin listing what feel like approximations of New Year’s resolutions. Their pledges are undoubtedly those of millennials; they promise to spend less time on their phones, and to “learn coding”, but surprisingly, the most poignant promises were about spending time with their parents – a love I perhaps hadn’t considered in this particular play. The “future” becomes more tangible, mirroring a natural maturation from teenage idealism to twenty-something reality, where goals are to do with a lifestyle, not a lifetime.

But the real nub of the play, the exhilarating energy which drives it, is the reminder that first love, whoever you are and whatever you’re living through, is always giddy, is always silly and serious in equal measure, and always seems as if it could last forever.