Review of: The Winter's Tale

Price:
£28 plus booking fee; discounts by age and for group bookings.
Reviewed by: Alasdair McIan

An intriguing and satisfying night moulded from a minefield play

It’s worth reflecting that the Cheek By Jowl brand has been about for over 35 years. Other companies seem to have a built-in half-life. CBJ, though, is still in the same hands and appears immune to ageing. If anything, it’s growing bolder. 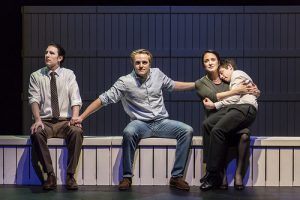 The virtues of which CBJ seems most proud are lucidity and emotional depth. They pursue those ends with deceptively simple means. Concentrate forensically on the most basic essential spring behind the action of each person, but ( and this is the hard bit) commit to it to the utter end, and eliminate all irrelevance to that end.

it take fiercely committed ensemble. Leontes’ boiling infantile need for emotional connection   may be specifically directed at three individuals. But it alters the course (both emotionally and physically) of everyone who becomes involved in his orbit. The commitment to that idea is wound up tight from the start and sustained to a reckless, exhausting extent. Tom Cawte’s Mamilius, a glorious departure from the usual sucrose moppet, is every flailing ounce his father’s son, despite the fact that physically he far more favours his mother or, in some lights, even Polixenes.

Amidst all this seething anxiety, Joy Richardson’s puritan, rock-like Paulina is thrown into unaccustomed relief, so that for the first time I was driven to wonder what would have happened if she had been entrusted with the upbringing of a couple of royal generations. The script is trimmed surgically to enable that boiled down saturation, and the result is as revelatory an account of the first half of the play as one can readily imagine.

The second half, from the Bohemian scenes onwards, is where many productions start to make excuses. The radical solution here is simply to engage with the dissipation of the narrative and enjoy it for a bit. Pastoral Idyll is not much bothered with. Against a background of subtly awful weather, the church-hall hedonism of the shepherds and the odious geniality of Autolycus are ingeniously modernised; the latter’s true vileness is also held back longer than usual, to genuinely ghastly effect.

The surgery done on Act V produces possibly the most striking revelations. Autolycus simply shades out of the picture: The passage of time has brought a wry, barely articulated accommodation between Paulina and Leontes, though he still exhibits some exhausted flickers of his old passion. The restoration of  Hermione, when it comes, is simple, quiet, and staged for magic rather than moral. No effort is wasted trying to shoe-horn in some moment of expiation whereby Leontes earns his second chance. It just comes, in course of time, to bring the narrative to a sort of dying rest. All that verve and heat has simply turned out to be unsustainable after all.