Review of: The Wedding at the New Wolsey Theatre

A stunningly choreographed piece of physical theatre that movingly and hilariously explores the human condition.

Gecko Theatre returned to their home town of Ipswich with their new show ‘The Wedding’ which is following on from its initial outing at Pulse Festival in 2016. It’s fair to say, as many well know, you never know what to expect at a Gecko show – which is part of the reason why I’ve been drawn back with intrigue each time. 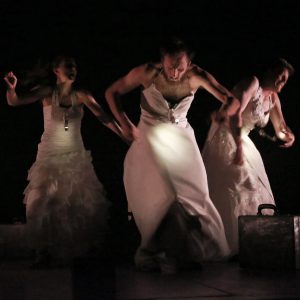 A pitch black auditorium comes to life as characters emerge through a tunnel and out of a hatch – each clutching a bear (a rather explicit reference to childhood, no less) before being allocated clothing by a woman with a clipboard. They are given either a wedding dress or a suit, used as symbols of conformity and status elevation with masculinity and femininity being both heightened and blurred. The characters are a blend of global nationalities, their words an indecipherable mixture of languages. Wedding traditions are explored through celebratory dances; the Jewish ceremony was in particular rather beautiful in its presentation.

We meet a couple who play out their daily routine with such precision and delicacy, tinged with a building anguish from the man who feels trapped by his life and job. The suffocation he feels from his routine and desire to break free is expressed with deep passion. Juxtaposed with that sequence is a poor immigrant and his family living in a suitcase that are a blend of Middle Eastern, African, Eastern European and Latino identities – cleverly relatable without being precise. I instantly recognised the rich tones from my native Ethiopia playing out in different sections throughout the show, a rare and unusual choice that filled me with nostalgia. Credit must go to Temesgen Zeleke’s vocal and musical abilities that blended movingly with the choreography to show the hardships faced by the marginalized. 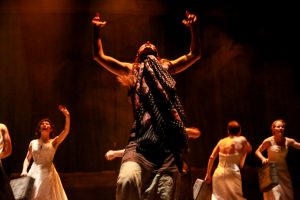 Amit Lahav’s creation cleverly unpicks the human condition and amplifies their nuances; capturing the emotional journey through much humour, sadness, anger, passion and everything in between. Through powerful use of imagery and symbolism, we see worlds colliding. Our habits, desires and obligations are laid bare in this physical theatre piece – a meeting of the senses. Each breath and movement was an extension of one another, a visual feast that left me reflecting and uplifted; I won’t be forgetting it anytime soon.

The Wedding will be continuing its run at the Warwick Arts Centre in Warwick from Thursday 4th May until Saturday 6th May at 19.30. You can book your tickets from their website https://www.warwickartscentre.co.uk/whats-on/2017/the-wedding-/ or through their box office on 024 7652 4524