Review of: How To Succeed In Business Without Really Trying

First London revival of 'How To Succeed' has a sterling ensemble, but falters on delivery however hard it tries.

How To Succeed? The titular handbook might’ve helped this production in a few areas – while at some points the show shines, the band swells and you get the true exhilaration of timeless material, in many others it stumbles or loses your interest in what happens next.

The material is classic: the work of Guys and Dolls composer Frank Loesser, it tells the story of J. Pierrepoint Finch (Marc Pickering) as he climbs the business ladder with the How To Succeed guidebook in hand. The songs are magnificently catchy, lifted by strong harmonies, and at times Maisey Bawden’s soaring soprano riffs. The band gives Loesser’s score a luscious ‘50s tone, though it could use more zip. The script has some gorgeous one-liners for the side characters, though sadly doesn’t give Pickering much to explore apart from ‘Get Power. ???. Profit’.

The show has the feel of an upscale Fringe piece, the ‘60s aesthetic sitting surprisingly comfortably in Wilton’s Victoriana (the chairs are stackable, the lights sit on an ornate balcony). Mike Lees’ set has useful height and width, with the band contained in a box above the Mad Men-lite set. Press night had occasional technical falters – the doors didn’t open properly (or don’t close), and some of the scene changes were grating and slow – contrasted by some of them being absolutely incredible (in fact, any moment with Matthew Whitby is a winner, giving a hilarious and kinetic lead to the ensemble numbers. When will someone put this man in The Book of Mormon?). 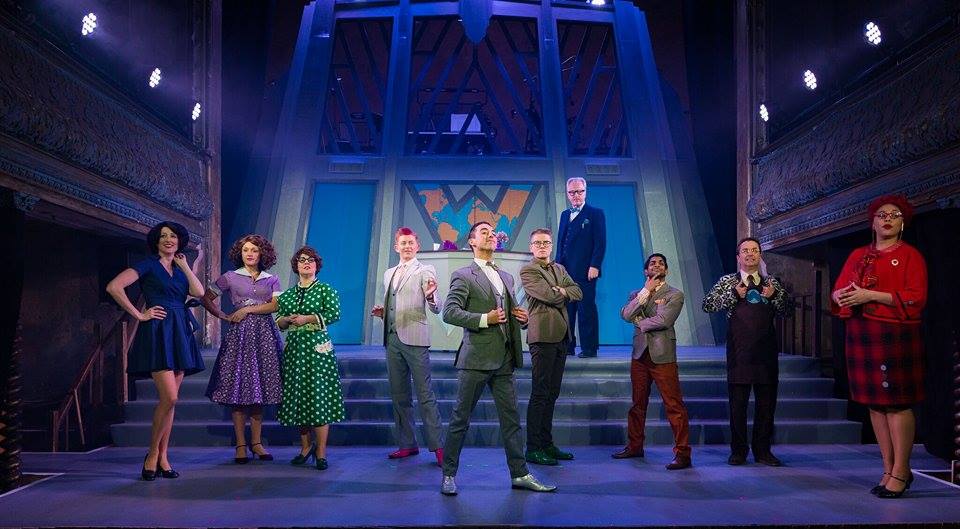 Part of the problem lies in the heroes. Pickering, looking rather like a young Johnny Depp with slicked hair and white teeth, feels too oily to win our loyalty. He sings warmly, overcoming the sometimes-uneven sound system, and hilariously works his way around misplaced lighting cues, but seems to be constantly raising a detached eyebrow at his castmates and the material he’s performing. Meanwhile, his love interest Rosemary (Hannah Grover) belongs in a different show altogether, her performance too polished for this zany world.

There’s more than one moment when both the leads are upstaged by the goofiness of the supporting roles – Geri Allen’s manic delight in Been A Long Day outshines the early courtship of Finch and Rosemary, while Daniel Graham literally outsings the two in the first act finale. Watching Graham play Finch’s rival Bud Frump with a clear-cut American tenor and full-bodied physical comedy, you’d be forgiven for wanting to see him take on Finch and vice versa. Many of the show’s strongest moments belong to the energy of the ensemble, including a frantic ode to the sacred ‘Coffee Break’ and Lucie Pankhurst’s witty choreography during Finch’s self-ode ‘I Believe In You’.

How to Succeed has its hero, but this production’s selling point is its chorus. In the final dance number the lighting glowed red, white and blue, the choreography was tight and vibrant, and Bawden’s voice was shown off to thrilling effects. In this business we call show, in moments it did succeed, but for the most part it needs to read the book a second time.