DANIEL DONSKOY, of the cult TV show Detectorists, is bringing A Song Goes Round The World to Upstairs in the Gatehouse in North London. Daniel will be singing chansons from the 1930’s, at the time of the Holocaust, in their native language of Yiddish, French, Russian and English. He will also be joined by special guest singers each evening. Theatre Bubble caught up with Daniel to talk about the show and the political significance of traditional songs in the current cultural climate. The show runs from the 25-30th April. 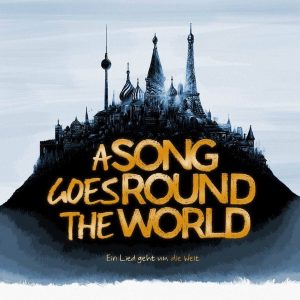 Theatre Bubble: Hi Daniel. This sounds like a really interesting project – how did it come together?
Daniel Donskoy: Thank you. Working on and devoting myself to A Song Goes Round The World together with my colleague Inga Davis Rutter – who is accompanying me on the piano – was truly fascinating. Back in 2016, about two months before the Brexit vote, I felt the urgent need to do something in order to show my political opinion, to unite people – and what better way could there be than doing that through music?
I was born in Russia, grew up in Berlin and Tel Aviv and came to London in 2011 – I always lived with a strong sense of European identity and now is the time to NOT let politics get in the way of unity and freedom. Performing the most adored European chansons whilst Theresa May calls a snap election is my way of being political. What would you rather – listen to the news or Edith Piaf’s biggest hits?

TB: You recently performed A Song Goes Round The World to Holocaust Survivors in a care home. What was this experience like? How has it informed your purpose in bringing these chansons to a wider audience?
DD: It was truly magical. When I was approached by Jewish Care to perform in one of their care homes, I was very quick to confirm. Firstly, the majority of inhabitants there were refugees and Holocaust survivors and I was very keen to meet them and listen to their stories – stories that may never be forgotten. Especially with everything that happens in the world at the moment. The thought that in about ten years time no more survivors of one the worst atrocities of the 20th century will be with us is absolutely unbelievable and it is imperative to listen now – before it’s too late.
When I arrived I was met by the most wonderful audience I have had in a long time. We had such a fun afternoon – and, of course, given that their heritage was French, Russian and German and many of them knew all of the songs we sang them together. It is beautiful to see how music can bring life and joy to people. It was so rewarding to have performed for this fantastic group and I want to thank them dearly for having me.
I am full of excitement and motivation for this coming week and am sure that I’ll get every single audience member to forget their day-to-day business and the awful news we are being bombarded with every day on TV and Radio and immerse themselves in music.

TB: You are joined nightly by different guest artists. I’d love to hear more about these, and how you chose the artists joining you for A Song Goes Round The World?
DD: I am joined by the best guests imaginable! I feel very lucky not only to be able to call them my colleagues but also my friends. Jackie Marks is simply phenomenal and was part of A Song Goes Round The World when we performed it last year at St. James Studio and we had a really wonderful time sharing the stage. Fun fact: Jackie was the first British Fantine in Les Miserables – Musical Theatre royalty so t’ say. Sarah and Monique are extraordinary performers, both of whom I met in our days at drama school – this will be the first time we have performed together since then. Monique has just finished 42nd Street at the Theatre du Chatelet in Paris and Sarah could recently be seen in In The Heights

TB: What do you hope people will take from this evening of cross-cultural music?
DD: Firstly a great evening – with a lot of laughter and perhaps a little tear but most importantly I’d love for people to see that we’re not all that different from one another -through the music and the stories of the artists behind the most adored European chansons.
Especially now in times where we seem to drift apart politically, culturally it is more important than ever to seek common grounds and unite and not let the politicians tear our society to pieces. Enough politics! Come along for a fun evening and I promise you’ll clap along too.

A Song Goes Round The World runs from the 25-30th April. You can buy tickets here.