Anne Brontë’s  1848 novel, The Tenant of Wildfell Hall, forms the basis for this new stage adaptation by Deborah McAndrew. Set in Yorkshire, a mysterious young widow, Helen Graham, and her son arrive at the desolate estate of Wildfell Hall, sparking local gossip and speculation. Local farmer Gilbert Markham gradually falls in love with her – but how will he feel when Helen’s shocking past comes to light? 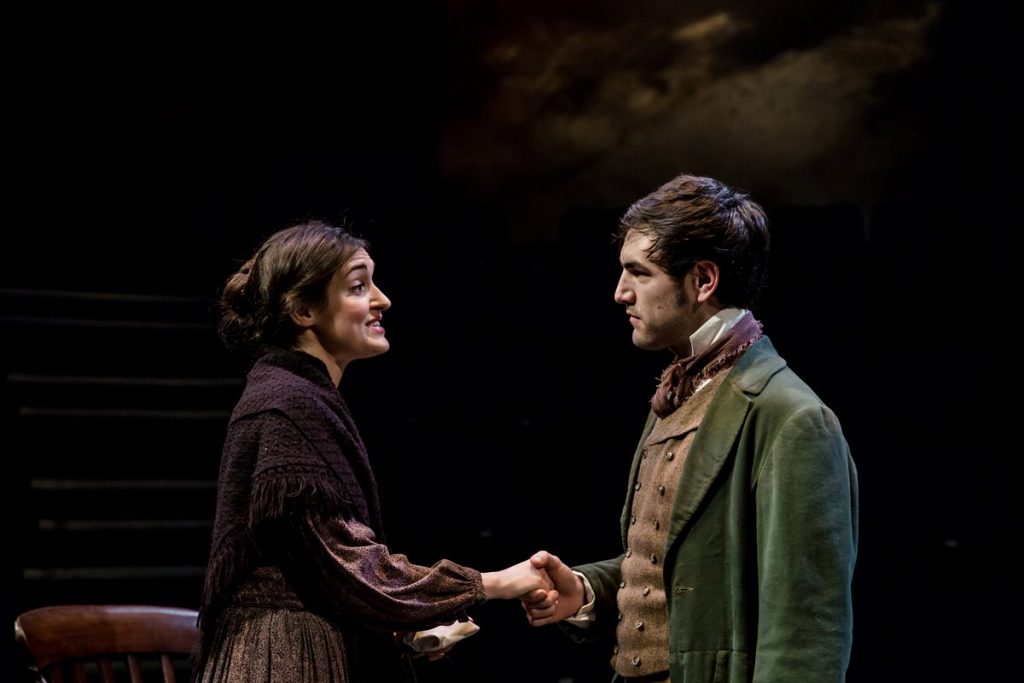 Were you familiar with The Tenant of Wildfell Hall by Anne Brontë before you began work on this production?
Phoebe: I’m thoroughly ashamed to admit that I’d never read a Brontë book before, and had never heard of The Tenant of Wildfell Hall. Now, it’s my very favourite. I can’t believe it’s not better known. I don’t really know why Anne is the least well-known of the Brontë sisters or why this novel was pushed to one side.
Michael: Same here. I’ve seen Brontë TV and film adaptations but never appeared in anything they’d written. When I was offered the role of Gilbert Markham in The Tenant of Wildfell Hall, I immediately read the book and felt quite shocked that I’d never even heard of it before. I thought it was beautifully written and the story covers some very challenging topics. Anne Brontë handles it all with such grace and eloquence.

How would you describe your character in The Tenant of Wildfell Hall?
Phoebe: The book was ahead of its time and proved highly shocking when it was first published. Helen Graham is an extraordinary woman, incredibly brave and courageous, as she fights to overcome the most overwhelming and awful circumstances.
Michael: That’s what the story’s about – this incredible woman who, when faced with these challenges, goes against everything that those around her believed at the time. For me, Gilbert is an observer, someone who watches the world play out in front of him. He’s a complex character in many ways, a learned farmer who likes to lose himself in books and stories. Then suddenly he meets this wonderful enigmatic woman and she turns his world upside down.

Have you appeared in costume drama before?
Phoebe: Since leaving drama school, I’ve been doing primarily Shakespeare so I’m very accustomed to fitting into a corset.
Michael: I haven’t really done much costume drama. In fact, I’ve never had to grow out my sideburns before for a role. I’ve appeared in musicals and modern plays and Sondheim pieces.

Michael, as well as being an actor, you’re also a producer with a special interest in new musical theatre – how do you combine the two?
Michael: I keep the two things separate, although I’m in constant pursuit of doing work that addresses stories that I think are important. If there’s an opportunity to act, that’s where I go first. If there are stories not being told for other reasons, then that’s when I’m happy to endure the stress, long hours and sleepless nights that necessarily accompany that. It’s very difficult and you feel under immense pressure, but it makes you appreciate exactly what it takes to get a project on its feet. As an actor, you can get caught up with your own work and process but it’s important to remember that there are another 50 or 60 people involved in a play, developing it and working on it for maybe three, four, five years and you, as an actor, are just the final piece in the puzzle. Due to my work as a producer, I find that I have a much stronger appreciation of all of the different elements that go into creating a production.

Phoebe, you come from an acting family. Both of your parents (Jonathan Pryce and Kate Fahy) are actors, so was it inevitable that you followed in the family footsteps?
Phoebe: I think that, when I was growing up, there were lots of things I wanted to do but, as soon as I started thinking seriously about a career, I knew that I wanted to be an actor. I’ve two older brothers who aren’t in the profession, so it was by no means inevitable. My Dad and I were very excited when we discovered that we’d both been cast in The Merchant of Venice at Shakespeare’s Globe that they went on international tour. Then it sank in that we were actually going to have to act together, but it was the easiest, most wonderful experience and we had such a good connection, which makes a difference. The fact that he’s my Dad never felt like an obstacle or difficulty at all. It was a wonderful experience, and not stressful at all.

Michael, they say never act with children and animals, yet you have two young actors and a dog in the production – what’s it like working with them?
Michael: The dogs are incredible because they’re probably the most disciplined members of the company. If you tell them to sit, they do! They’re very loving and affectionate but have been really well-trained. The kids are really lovely and talented, too.

The Tenant of Wildfell Hall is at Octagon Theatre Bolton until 22 April (octagonbolton.co.uk) and York Theatre Royal from 26 April to 6 May (yorktheatreroyal.co.uk)