Price:
From £12
Reviewed by: Gregory Lake

An enigmatic and inconsistent collaboration of movement and text from playwright Simon Stephens and movement director Imogen Knights.

Nuclear War is a strange experiment, a collaboration between Simon Stephens and movement director Imogen Knight which springs from a twelve-page “series of suggestions on desire, death and time” by the playwright. Perhaps what is strange about Nuclear War is its resulting lack of strangeness – whilst there are excisions from the printed text, this and the performed piece still emerge as a fairly linear exploration of the state of mind of an individual mourning loss. However, whilst Stephens might be best known for more traditional work – adaptations of The Threepenny Opera and The Curious Incident of the Dog In The Night-Time, and the university drama favourite Punk Rock – this isn’t completely new ground for the playwright. His 2006 work Pornography invited textual ambiguity in similar ways, the introduction claiming it could be “performed in any order using any number of actors.”

Stephens acknowledges that the thematic concerns of Nuclear War are not new ground, either. Rather they continue to explore preoccupations which reoccur in his work – the alienation of the individual in a commodified culture. In Knight’s production, the text forms the inner monologue of a middle-aged woman (Maureen Beattie) struggling with loneliness, sexuality and ageing in an uncaring urban landscape. This inner monologue is given expression by the four-strong ensemble – sometimes directly textually, and sometimes as a text which becomes a springboard for movement. Stephens’ interest seems to be in the creative art of theatre as an interpretive process – not as a slavish reproduction of authorial intention, nor as a director’s own sole vision that has no connection to its material. This of course is a tension being tested and tried by directors across the world in every production they stage – but in Nuclear War Stephens is a playwright who is meeting them in the middle, allowing for greater fluidity of his function. It is an explicitly dual-authored work. 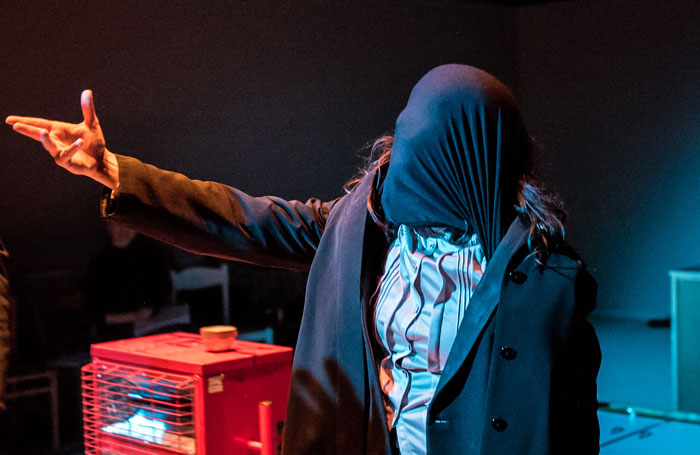 The great test, then, is whether or not the fusion of text and movement in Nuclear War yields what Stephens calls “an effect that is a product of that juxtaposition however disconnected the individual elements may be.” It is best to see Nuclear War not as movement accompanying and interpreting text, then, but as two different disciplines meeting. As might be expected, the production has inconsistent results. There are powerful moments of theatrical power which linger in the mind but defy easy description – where design, direction and poetry collide and unnerve. One particularly striking set-piece sees the chorus, with tights stretched over their heads, orgiastically devouring satsumas as Beattie recites the sensory overload of the high street. Knight conjures from her ensemble a movement style which is estranging, alien, and often deeply disconcerting.

However, as many moments in Nuclear War feel symbolic rather than expressive. Moments where the ensemble are used to their best – as an anonymous, sexualised but inhuman mass of energy – are outweighed by those where they feel like placeholders for meaning. There is much in Nuclear War that feels like detritus from the devising process – reoccurring objects which must have held significance for the company’s understanding of their work, but which in performance signify only their function as byways to the finished piece. A half-eaten packet of digestive biscuits, a porcelain cat, fluorescent jackets used in rehearsal but left hung by the door in performance – these do not amount to anything meaningful beyond demonstrating that this piece has had an interpretive journey in rehearsal.

Ironically, in seceding control of the piece’s meaning – and I agree with Stephens that, in the theatre, this is nothing revolutionary – Stephens shifts the focus for his audience from trying to discover the playwright’s intention for the effect of the piece, to trying to parse their intention for their experiment. This is why, more than for any other review, I have found myself resorting to quoting the playwright’s notes printed with the text.

Finally – I would like to call attention to the technical team behind Nuclear War. It does not do them or the piece justice to refer to it as a dual-authored work. In particular, composer Elizabeth Bernholz and sound designer Peter Rice deserve accreditation for their contribution to Stephens’ postmodern, neon purgatory of urban banality. The importance of their artistic input demonstrates Stephens’ understanding of Nuclear War as a collaborative work – and when all its elements come together, it is a potent reminder of the potential of this process.

Nuclear War runs until the 6th May. Buy tickets here.