Review of: The Braille Legacy at the Charing Cross Theatre

The Braille Legacy’s concept, admittedly, unnerved me as I read up on the context. A show about the discovery of such an important linguistic tool cannot be underplayed, but to have actors imitating blind individuals on such a scale seemed like it could be an incredibly tricky feat to pull off without seeming offensive. One question that lingered was – wouldn’t this be so much more interesting if it was delivered by a company of blind individuals – in the same vein as Deafinitely Theatre already do.

If the show is to be commended, therefore, in its execution, it’s down to the fact that it can be enjoyed by those both with or without the capacity to see – an accommodation that inevitably affected the show’s book and lyrics (as you have to be versatile in your choices to guarantee neither party feels lost or put off).

The show charts the early life of Louis Braille (played with a typical adolescent curiosity and ferocity by Jack Wolfe) – a 15 year old that adapts and modifies (in the process creating) a language based on physical touch – granting individuals the opportunity to read scores of texts like never before in the 19th century context, against the background of a government ignorant to the disabled (eerily familiar?). A complex, nuanced play that can use and transform our understandings of senses and sensory experiences – if played in the right way. What actually occurred, however, was a melodramatic bounce between political intrigue, a sloppy kidnapping side story, and an attempt to construct a friendship between Braille and others his age. The sad fact is that there is an interesting story here – especially as Braille was a talented musician in his own right. It would have been wonderful to see the interplay between a younger and older Braille – one teaching himself to play music, the other to construct this language. Wishful thinking, to stress.

To cut to the heart of the issue – the show was simply sloppily executed. Blocking was repetitive and felt entirely abstract – the theme of having a black blindfold over your eyes to indicate blindness was inconsistently used (so much so that the end of the first act had Braille taking off his blindfold to signify the fact he had had a revelation – suggesting that having a moment of revelation is akin to gaining sight or vision, which, to this reviewer, utterly undercutting the central theme of blind individuals in no way being inferior to others). 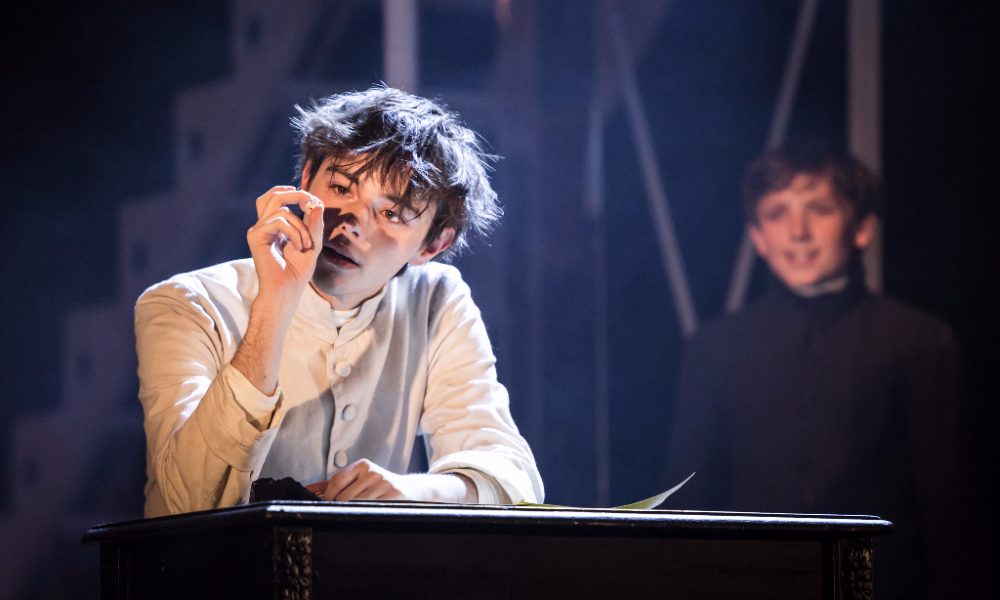 Director Thom Southerland didn’t seem to be trying anything interesting with the show, a theme that ran through to Tim Shortall’s set design – a bleak, monochromatic vision of 19th century Paris that sapped any sense of excitement or wonder from proceedings. On three separate occasions lighting designer Tim Lutkin resorted to a blue wash to signal the end of the song, with only one more than memorable lighting choice at the start of the second act, silhouetting one of the actors against a hazed spotlight.

I’ve mentioned in earlier reviews that Southerland has the ability to construct almost exclusively white casts for his shows at the Charing Cross – as was the case in the last two shows I’ve reviewed there – Titanic and Death Takes a Holiday. The first time I said could be justified by historical context. The second time felt utterly inexcusable and, the fact that his entire adult cast is, yet again, white, brings the show down in both my eyes and falls short of the standards this site tries to uphold.