Review of: Around at Jackson's Lane

Reviewing a children’s show when not a child remains a rather tall order, seeing as I am absolutely nothing like the intended audience, and indeed feel rather self-consciously ‘adult’ whenever I squeeze my way into a theatre full of laughing, fidgety 5+s. It is for this reason that I intend to refer intermittently to the words of a particularly vocal 6-year old boy sitting in the row behind me, who was utterly determined to keep his mother (and therefore most of the families around) up-to-date with what was happening onstage by providing a full running commentary of the entire piece. My thanks go to him, a career in reviewing is his for the taking when older. 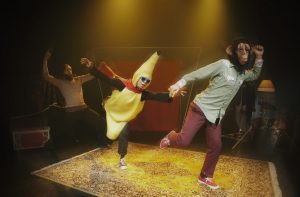 Around by Race Horse Company loosely takes place in a circus-like atmosphere, consisting mainly of acrobatic feats strung together with animal masks and a banana-pooping actor in a banana costume. My companion behind me loved this particular aspect of the piece, remarking rather sagely for one his age that ‘if I kept him as a pet we would never have to go shopping again’, displaying an apt economic mind as well as an opinionated one. However, while the individual circus sections kept the children rapt, the connecting sections seemed to falter somewhat. Relying completely on mime means having to wholly capture the attention and the imagination of those watching, and these small interlude moments weren’t quite clear enough to give the piece enough of a narrative. I can’t help feeling that some sort of story stringing the play together, however simple, would have given the piece an arc that it is currently lacking. As Mr Vocal behind me complained of one of the juggling sections ‘but why is he throwing balls? He threw balls 10 minutes ago already’.

Disregard these connecting sections, however, and it is completely impossible not to marvel at the talent of the performers involved. Very simple ideas, such as a section including a screen and three elephant masks, were met with screams of delight from all around me. The music was gloriously atmospheric and some bubble-play in particular was hugely enjoyed (although upstaged by an errant red balloon). It is just a shame that the level of attention obviously payed to these amazing circus moments was not matched by the vision of the show as a whole.

Despite these shortcomings, all of the children around me plainly had a glorious time – my back-row friend gasped aloud when Kalle Lehto rolled out a carpet for use later in the piece. This is the first time I have ever experienced a ‘WOW’ of amazement stemming from the simple sight of a carpet being placed, and is undoubtedly testament to the atmosphere of wonder Race Horse Company meticulously created throughout.