Review of: Ugly Lies the Bone

Whilst undeniably a good exploration of virtual technology's potential to change the face of theatre, the overall narrative was too predictable to match its more innovative digital side, and needed more variation in emotional level to be enticing.

Ugly Lies the Bone graduated from its off-Broadway run with impeccable credentials – a New York Times Critics Pick, winner of the Kesselring Prize, and praised by Charles Isherwood as having ‘dauntless conviction’. Hitherto unperformed in the UK, the production has been thrown in to the deep end by the National Theatre with a 40 show run in the 900-seat Lyttleton Theatre. Unfortunately, the show fails to translate its previous success for a British audience – too unadventurous and safe to really feel like it is breaking the new ground that its marketing copy promises. 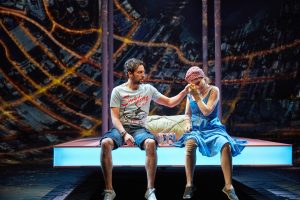 Ugly Lies the Bone is primarily a journey of identity – Jess (Kate Fleetwood) has returned from Afghanistan with pronounced burn injuries and is rebuilding her life in a small Florida town, itself decimated from losing the NASA Shuttle industry that previously sustained its economy. Stevie (Ralf Little), as Jess’ insensitive ex, is also struggling through married life and an unfulfilled existence. Whilst he reaches out to the past, Jess is pushing forward, with none of the victimhood or self-acceptance stereotyping that can often dog the ‘disfigured woman’ narrative. Inspired by real developments in healthcare and pain management, Jess is a pioneer of Virtual Reality medical treatment, which uses computer generated environments to distract patients from pain. She finds solace from frustrating events in her mountainous, snowy dream world.

Es Devlin’s set is the memorable highlight of this production – like the interior of a pitted satellite dish, a curved floor-to-wall white surface receives 180 degrees of beautiful film projection. Alternatively a town map in white 3D relief, a birds eye view of the Florida urban coastline, and an all-encompassing screen of Jess’ virtual mountains, Luke Hall’s video projection is rich and nuanced. Digital elements of theatre can feel often feel zeitgeisty or shoe-horned in, but Ugly Lies the Bone is one of the more stunning examples of how video projection can enhance storytelling.

Understandably, writer Ferrentino’s work drips small town America. It’s all convenience stores, American Dreams, self improvement and health payments. Cultural references aside, it speaks strongly to an American appreciation of the ‘transformative moment’ in theatre. The play hinges on over-signposted turning points, spaced out in an otherwise fairly one-note narrative. Despite an occasional comedic moment, the script felt predictable and flat. Strong performances from Kate Fleetwood and Olivia Darnley in particular, were held back by one-dimensional characterisation and some disappointingly repetitive work from fellow cast members Ralf Little and Kris Marshall.

Mirroring Jess’ increasing fixation on virtual reality, the digital sequences became the highlight of the story, providing solace through Hall’s mesmerising imagery and Buffy Davis’ meditative Voice (as the technician guiding her through). More tension could have been drawn from the conflict between Jess’ real and virtual worlds, and Director Indhu Rubasingham could have pushed the emotional flashpoints further, as they came across in monotone. A strength of Ferrentino’s writing lies in her refreshing approach to female characters – Jess and her sister Kacie provide the strength and sanity of the piece, whereas their men are hapless, unmotivated and cowardly. Yet, this never tips into reverential treatment – Jess is never written as a Woman with a capital W, rather just as a person, proving that strong female leads do not always have to be a deliberate expression of the universal female experience.

Whilst undeniably a good exploration of virtual technology’s potential to change the face of theatre, the overall narrative was too predictable to match its more innovative digital side, and needed more variation in emotional level to be enticing.