This co-production between the English Touring Theatre and Rose Theatre Kingston brings to the stage Sandi Toksvig’s new comedy Silver Lining, set in a retirement home. The use of projections and lighting along with the stormy sound effects  designed by Mic Pool and Mark Doubleday created a convincing atmosphere and had the audience jumping through the lighting strikes; made more vivid by Michael Taylor’s simple and plain coloured set which was authentic in design of a retirement home.  I was hoping for a broad representation of older women in Rebecca Gatward’s production but central to this story are 5 white older women who are preparing to be evacuated from the rising waters caused by Storm Vera. While their characters have different backgrounds and experiences, it seemed there was more of a concern to achieve feminist quotas for their benefit while leaving out BAME older women. 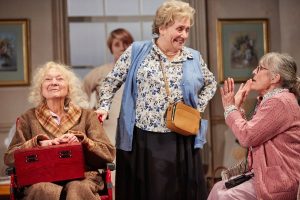 Maureen Cookson played by Rachel Davies was endearing as a women’s rights advocate and actress who is lost in the memories and music. May Trickett, played by Maggie McCarthy, is a wheelchair bound lesbian with a bohemian vibe who is at odds with her sister June Partridge (Joanna Monro), a pious Christian woman.  Both women deliver witty and clever lines that felt most reflective of Toksvig’s humour but that is also how I saw them; as an extension of her – which is a distraction.  I saw great potential in the exploration of their relationship as well as in their individual stories they shared (like May’s story about her partner Peggy and June’s kleptomania which, admittedly, had moving elements) but it just didn’t dig deep enough. St Michael (Amanda Walker), named after her night gown because none of the residents know her true identity, is woman with dementia who sits holding a box of dildos on her lap; of course hilarity ensues with that revelation. Her inner monologue was moving and could have carried more weight if she wasn’t a source of constant gags; the invisibility the illness can create for a Dementia sufferer could have been explored further to create that balance. 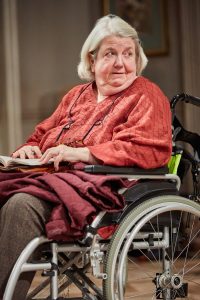 Gloria Bernhard, played by Sheila Reid, is a cockney woman in a leopard-print jogging suit who has a youthful energy and is tech savvy , refreshing but also rather two dimensional.  I found her mobility doubtful – she appeared to walk with ease while using a cane, but Reid had a lot of comical moments with her one liners. Hope Daley played by Keziah Joseph is a black health care assistant from Croydon, facetiously portrayed as “the angry black girl”. She was constantly talked down to by the residents which only served to show divisions between the characters in a way that seemed to endorse this personification, rather than understand it. There was a mixed reaction from the audience of those laughing in favour of the old women at the expense of Hope and those laughing awkwardly during their interactions – something that made me uncomfortable.  The importance of highlighting that there can be a lack of respect for the elderly and that they can be made to feel invisible was well intended through Hope’s behaviour, but a young health care worker who is rude and hates their job is a tired stereotype in the health care industry. It might have been permissible as one example if there was more depth to explore her character and motives. Hope does go on a journey to becoming more understanding and there is a tender moment at the end between her and Gloria but unfortunately overall it showed me that respect doesn’t go both ways and is instead more conditional.  Hope’s speech at the end about us all being the same regardless of race, religion etc was also well intentioned but felt rather hollow; if the characters differences were meaningfully acknowledged and explored it wouldn’t erase the similarities that connect them which go beyond more than just being human. 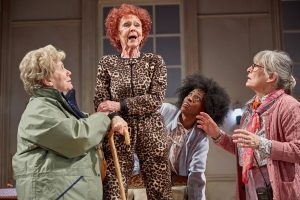 There were some potentially moving moments that attempted to show warmth but they were fleeting and barely scratched the surface. Gloria deciding not to take her own life in the same breath of wanting to do so and the hurt from her son not visiting her were all skimmed over, which was a shame. The attempt to tackle serious issues within the frame of humour such as suicide didn’t play out well either because it focused on making light of the issues instead of addressing them.  With further research and seeking out voices from different women, the characters would have been fleshed out better and be able to authentically weave between emotions instead of making unrealistic jumps. Stereotypes and the mentality of the multi-generational and racial climate in the UK felt reinforced instead of meaningfully engaged with. The issues being tackled with seriousness and depth wouldn’t actually have taken away from this play being a comedy; it would have enhanced the audience’s emotional journey and investment in the characters and their stories.

Silver Lining will be continuing its run at the New Wolsey Theatre in Ipswich from Thursday 16th March until Saturday 18th March at 14.30 and 19:45. You can book your tickets from their website https://www.wolseytheatre.co.uk/shows/silver-lining/ or through their box office on 01473 295900