'Jeramee, Hartleby and Ooglemore' is perfect for an audience that hasn’t yet learned the rules of theatre, or indeed of life. A really beautiful show which brings families together on one level - that of the child - for an hour of playful theatricality, which is funny and poignant in equal measure.

A cardboard sun, sand-like flooring and floormats painted to look like the sea announce that we are at the beach. A signpost barring seagulls tells us that, as with much of ground-breaking director Tim Crouch’s work, we are not meant to imagine that any of this is real.

Crouch has made his name rejecting realism, and forcing audiences to become complicit in the telling of stories. This kind of blurred boundary works far better with children than adults – make-believe is more their realm than ours. And the children I saw at Jeramee, Hartleby, and Oooglemore, in their front row seats on the floormats, unashamedly demanded to be part of the show.

The title characters are, we assume, children spending the day at the beach. Writer Gary Owen has made sure to include all the awkward things that we’d recognise there – the struggle to get changed without exposing yourself, the struggle to keep the sand off you, the struggle to not lose your beach ball in the sea – and all these little episodes elicited knowing laughs from adult members of the audience. What had the children transfixed, however, was that these struggles took on epic proportions. Lotte Tickner as Hartleby contorted every aspect of her body and face just to get changed and lie down on her towel. The show’s clowning theatricality meant that each step of a day at the beach involved challenge, and the children in the audience were thrilled to find themselves a step ahead of the children they saw presented on stage, and able to call out possible solutions to their problems. 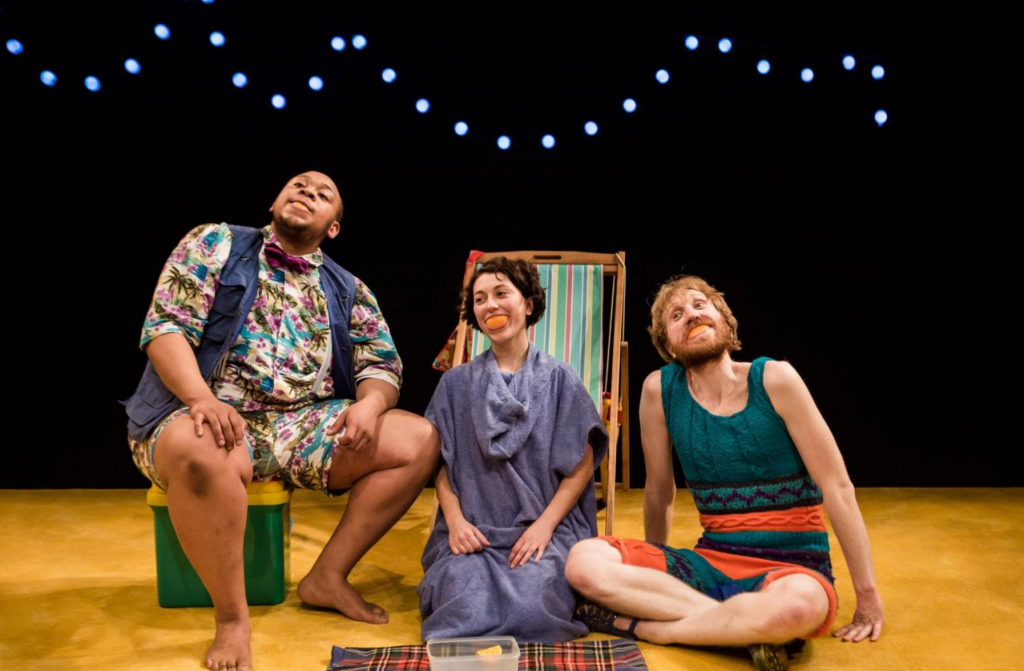 To add to the absurdity, the only words in the entire script are the characters’ names. The performers are able to show us three distinct child-types with their body language alone; Fionn Gill’s hilarious sideways glances are enough to tell us how gormless Oooglemore is, Jude Owusu’s beaming smile makes him the pacifier of the group, and Tickner practically exudes the fidgety energy instantly recognisable in hyperactive children. Having an entire show based around names proves how much we can communicate with tone, facial expressions, and body language – we do not require the signifiers of words in order to understand what is being said. Those three words prove more than sufficient for conveying Oooglemore’s fear of water, or the sense of hurt and betrayal that Hartleby feels when Jeramee gives her towel to Oooglemore. When Jeramee disappeared for just a little too long towards the end of the show, Hartleby’s anguished crying of his name was poignant enough for one of the children on the floor to adopt a sing-song parental voice to say, “Jeramee will be back soon…” By leaving words out of it, the play captures a common language of human interaction that we often take for granted.

If I could make one criticism, it was that at times, the clowning routines became a little episodic and predictable. We were waiting for the challenges, and knew that the characters would struggle with whatever new elements were introduced. Thus, after the changing, the beach ball, the towel, and the toggles on a duffle-coat, Jeramee’s deck chair struggles felt a little tedious. Likewise, it seemed to take too long for him to teach Oooglemore how to put on armbands. But that may be my adult brain speaking – the children were engaged throughout.

But then (and there’s no way of saying this without stating the obvious), this show was made for children.  I don’t mean merely that it was silly, or garish, or seemingly simple, though it was all of these things. This show is perfect for an audience that hasn’t yet learned the rules of theatre, or indeed of life. I instantly understood the floormats to be a metaphor for the sea, and therefore when the beachball crossed the line of them and went behind the audience, understood that it was lost. The children shouted, “Go and get it!” For them, there was no difficulty in being simultaneously in the sea and in a theatre – they didn’t have to trick themselves into cancelling out one in order to see the other.

They accept a shared language of space. They accept gobbledegook. They don’t need armbands or beach balls or shuttlecocks to play. The best game of all, the one that allowed Jeramee, Hartleby and Ooglemore to play together, was one that involved an imaginary ball, and a clicking noise they made with their mouths. They were connected by their collective imagination. What happens in our heads connects us far more powerfully than what happens in front of our eyes. This is a really beautiful show which brings families together on one level – that of the child – for an hour of playful theatricality, which is funny and poignant in equal measure.