Review of: a profoundly affectionate, passionate devotion to someone (-noun) at the Royal Court Theatre

A heart-wrenching examination of love and lethargy, 'a profoundly affectionate, passionate devotion to someone (-noun)' at the Royal Court Theatre marks another triumphant production for debbie tucker green.

It is difficult to discuss the Royal Court Theatre as a bastion of new writing, and its daring approach to avant garde theatre, without immediately being drawn to the works of the award-winning playwright debbie tucker green. Heralded for her stripped back, laid bare approach to dialogue, most recently seen in her 2015 critically acclaimed play hang (yet another Royal Court production), she returns with a profoundly affectionate, passionate devotion to someone (-noun), a play which examines relationships in their rawest forms. After ninety minutes of these intense, and often discomforting, snapshots of life, there should be no doubt that tucker is one of the country’s greatest modern playwrights. 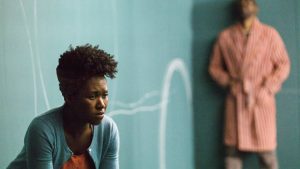 a profoundly focuses on three couples as they navigate the potential burdens of love: children, illness, and the boredom that can arise from routine. tucker’s dialogue often overlaps, with frequent word ommisions, hedges and repetition, as her characters seem to fall into the argumentative patterns they have created for themselves. If not done right, such dialogue can quickly become tiresome, but tucker’s words flow like poetry, a rhythmic lyricism that is present in many of her works. It is not often that dialogue can both be lyrically rich and reflect the banality of real life, but tucker’s mastery and originality manipulates these supposedly polarising styles with ease. She plays mercilessly with typical narrative conventions, revealing a new character in the final moments of the play, and introducing another for what seems only a brief period of time, before they are removed entirely, never to be seen again. This would be immensely frustrating, where it not for the fact that the play devotes itself to truth; it reflects the painful fact that people can so easily leave others, and also be at risk of others leaving them in turn. A special mention must be given in this regard to Lashana Lynch and Gershwyn Eustache Jnr (known as ‘A’ and ‘B’), who dominate the first half of the play with tour-de-force performances. Their depiction of a couple who live a dichotomised life of love and lethargy is heartbreaking; once they take their last embrace, and the narrative then rips away from them to confront another tumultuous relationship, their absence is felt for the remainder of the production. 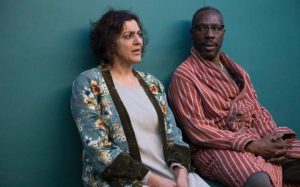 Alongside the text, Designer Merle Hensel creates a somewhat claustrophobic atmosphere, enclosing the audience within a low ceiling-ed room, surrounding them on three sides by raised platforms which the actors use to wander aimlessly upon, or to yell at each other across the space. This contains the emotion, compressing it to the point of unease — it feels as if the audience’s presence is an intrusion, and yet we are almost complicit in their pain. Apart from this clever use of shrunken space, however, the set design does not seem to wholly relate to tucker’s play. Characters draw on chalkboard walls, repetitively scrawling lines and circles in every blank space (perhaps signalling the repetitivity of life, maybe the cyclical nature of argument and reconciliation, or just random scribbles); audience members sit in the centre of the space on swivelling stools, so that they can track the movement of the actors as they manouvre the thrust staging. Although this last feature was crucial for audience visibility, after a prolonged period of time it wasn’t particularly comfortable, which became distracting as the play continued. Arguing that this was a purposeful and empathetic allusion to the characters’ emotional discomfort would perhaps be a step too far.

Calling such a play a profoundly affectionate, passionate devotion to someone (-noun) seems somewhat playfully cruel, as it appears to focus more on the fallout of love, and the manner in which lovers can so easily lose their way. I often find that when theatre confronts issues of the heart, they can be given some form of rose-tinted edge, so that at least some characters can find a semblance of hope or redemption within a neatly packaged narrative solution. However, tucker does not deal in such cliqued notions, instead forcing her audience to confront their own uneasy familiarity with the agony that can walk hand in hand with devotion — after all, how many of us can say that we have not been victim to the faults and flaws of love?

a profoundly affectionate, passionate devotion to someone (-noun) will be continuing its run at the Royal Court Theatre until Saturday 1st April at 7.45pm, with 3pm matinee performances on Thursdays and Saturdays, and no Sunday performances.

This production has an age guidance of 14+.

£12 Monday tickets are released online at 9am every Monday from 13 March.