Review of: A Passionate Woman

Kay Mellor, better known for her television work (Band of Gold, Fat Friends) offers us a bitter-sweet, even whimsical, play in A Passionate Woman. Betty (Liza Goddard), shut away in her loft amid the accumulated, cast-off clutter of her suburban life, tuts and frets as her son’s marriage ceremony grows ever closer. The event marks the closing of ‘the last good thing in my life’ and so, in protest, she refuses to budge as her son, her husband, and finally, after she has climbed onto the roof, the fire brigade make successive bids to talk her back down to the real world.

The moment Betty steps forward and soliloquises in that warm, liquid Leeds accent we take her to our hearts. She confides in us as if we are her familiar ally and we, in turn, find in her a familiar figure – a garrulous, lovable, sixty-something housewife worn down by life’s long littleness. And as her son (endearingly played by Antony Eden) attempts to put a stop to her mad wittering she converses with Craze, the apparition of a young, Polish man she shared a passionate, extramarital affair with all those years ago. Hasan Dixon plays a long, lean streak of Central European passion – an anomalous figure in a production otherwise rooted in that recognizable brand of down-to-earth, northern Englishness.

Russell Dixon excels as Donald – the bellowing, blundering husband – a grumpy guard dog whose love for his wife intensifies even as his ability to show it diminishes. “What did you ever see in him?” asks the polish lover of Donald. Betty – “He were very handsome before he started to growl.” Burly and blustering, a great, solid wedge of Yorkshire maleness, he nevertheless grows in dimensionality as each character, in dialogue unusually free of subtext, makes revelation after revelation. 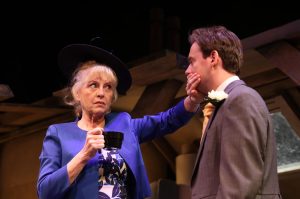 The set is necessarily drab – we are after all confined to a loft – but that does also mean if feels confining too. And there is some mechanical awkwardness as Donald swoops in, albeit in comic fashion, on a hot air balloon. Donald, resolved to sweep his wife into the sky on a gust of newfound passion, simply can’t find the right words. “It’s very romantic!” observes Betty. “It cost a fortune!” he flatly replies.

In this short, sweet play Kay Mellor’s achievement, skilfully realised under Paul Milton’s direction, is to hold in delicate equipoise comedy with pathos, humour with sadness. We may leave the auditorium laughing but we do so with an emotional wound in our side.

Writer, journalist and PhD candidate. Has fingers in more pies than he knows what to do with...