Review of: Maliphantworks at The Print Room

The performance transports the audience in a universe of sheer beauty and utter perfection of physicality, light, and music.

A five-star show is one to which any of the following apply: a performance in which you wouldn’t change a comma; a spectacle which gives you intense pleasure as you watch it and leaves you speechless; a show which you find yourself simply not wanting to end; a piece of theatrical genius. All of the above apply to maliphantworks, which is the reason why I’m giving it five stars.

The show consists of four pieces performed in two different spaces of the labyrinthic venue that is The Print Room. For the first, the audience is divided into two groups, who attend the piece consecutively. We were made to queue, shouted at, made to wait, kept in suspense. But all this was absolutely worth it when the first show of the evening, WALL, began. Having it performed in the smaller Studio rather than the Auditorium was a brilliant choice. The piece breathes with life and energy. The best part of the performance is by far its spatiality: the structure on stage on which Tommy Franzen and Dickson Mbi dance opens up new dimensions, giving the impression that we were watching them both from our seats and from the ceiling. The perfection of their execution, the gentle strength with which they lift each other, the total synchrony of movement made it one of the best pieces of dance I’d ever seen. 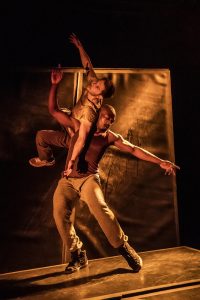 Full of expectations, I made my way into the Auditorium, and I was not disappointed. The following performances by Russell Maliphant, Dana Fouras, and Daniel Proietto are just as astonishing. Maliphant excels in a solo-show, One Part II, which replaces his duet with James De Maria, unable to perform due to an injury. The piece shines with mind-blowing simplicity, with the choreographer/dancer’s vaporous movements accompanied by Bach’s exquisite Sonatas. In Two, Fouras creates Bacon-ian shapes, mostly from the same spot, and blends perfectly with the music. Proietto offers an algid and magical piece, to the notes of popular Satie’s Gnossiennes. 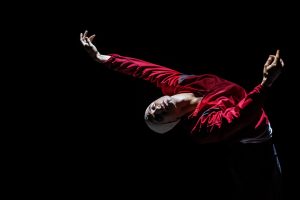 As well as the quality of movement of each individual dancer, I was amazed at the simple and yet absolutely superb light design: throughout the show, the lighting made the performers emerge from and disappear into the abysses of darkness, illuminated only parts of their bodies, and made them seem to be skating on a pond. 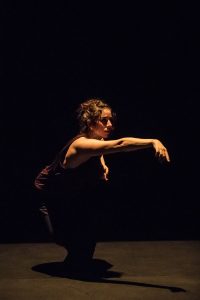 All the pieces featured in maliphantworks are reworks from original pieces which premiered between 1996 and 2012, but feel as fresh as if they were choreographed yesterday. The performance leaves the audience in awe, transporting them for just over an hour in a universe of sheer beauty and utter perfection of physicality, light, and music.

Maliphantworks is running at The Print Room Tuesday to Saturday until 11th March at 19.30. Tickets can be booked from their website.