Review of: The Kid Stays In The Picture

Complicite's multimedia adaptation of the life of Robert Evans, the producer of The Godfather and Chinatown, sounds better than it looks.

Robert Evans’ autobiography ‘The Kid Stays in the Picture’ is the stuff of a smash. It has love, organized crime, and insight into the darkest side of America in the late twentieth century – appropriate for the life of the man who produced Love Story, The Godfather and Chinatown. There are memorable characters imprinted on cultural history, engrossing anecdotes (including the director’s praise that gave Evans his title) and zingers in the dialogue – The Godfather’s cast and crew are so authentic Italian “you’ll smell the spaghetti”; Chinatown’s title is explained as “a state of mind”.

As far as literary adaptation goes, Simon McBurney has almost literally put the book on stage, with much of Evans’ text delivered by the company through radio and handheld microphones towards the audience, a technique with shades of the radio play. We can even see a teleprompter patiently scrolling through the text reflected on the set walls. Though projection, costume and reconstruction of on-screen moments or personal memories carry us back and forth through Evans’ life, the bulk of the story is delivered through sound, raising the question of how much this story belongs on the stage.

McBurney rarely strays from the story’s origins in text – times and dates are projected in the Courier font beloved of film scripts, flowing seamlessly into the stage directions and dialogue of a picture. Beneath these lines the cast lip-sync to the original deliveries, but more often recreate those stars (Mia Farrow and James Cagney both appear in Evans’ early rise). The company seamlessly assumes new voices and personas, passing Evans’ voice between them and individually playing the cast of his life. As such biographies tend to, Evans’ story intersects with key figures and events of the twentieth century, leading to a rise in witty imitations (Clint Dyer’s ageing Brando makes a particular highlight). 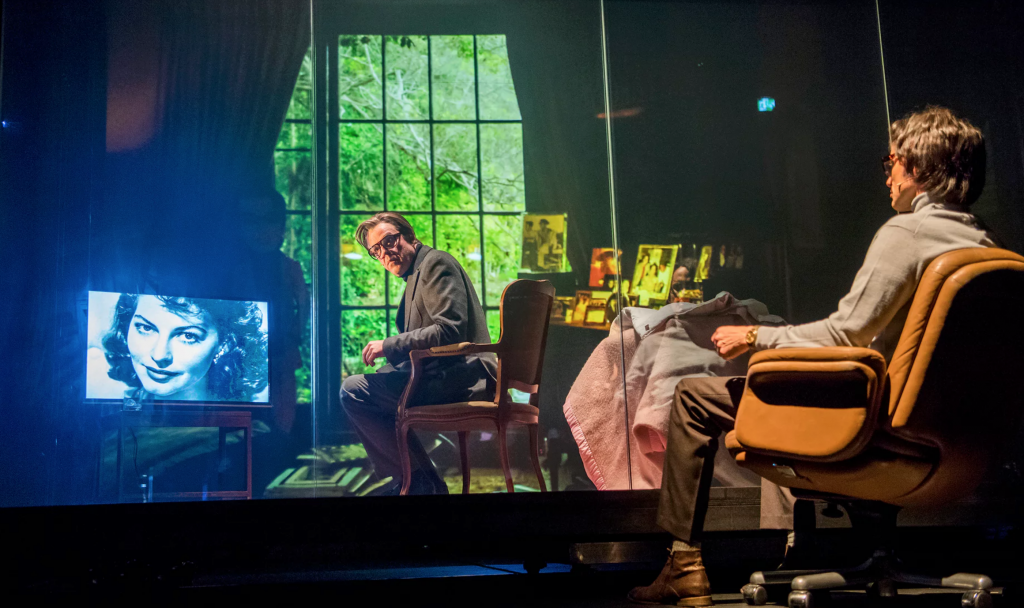 Beside the ensemble voices, we see five versions of Evans, the discrepancies neatly reminding us that seeing the adaptation inevitably separates us from the real speaker. Behind the projected photographs, the woman (Heather Burns plays his teenage self, later stepping into the hippie look of his first wife Ali McGraw), and Christian Camargo carrying the role as an adult, the silhouette of Danny Huston (the son of John Huston, one of the tour de forces of Chinatown) intones Evans’ internal monologue with a wry gravelly tone. Huston rarely appears in the flesh, forming instead a shadowy reminder of Evans’ inevitable collapse – the projected image of Evans and McGraw affirming their wedding vows is divided by Huston’s lonely frame.

Simon Wainwright’s video design neatly bridges the gap of live and recorded content, with the main set forming an immense screen for Malibu poolsides, Evans’ Hollywood home and scenes from his classics. The divide collapses further through the use of live recording: deploying close-ups, dolly zooms and pulls away to depict moments on set or the key images in Evans’ memory. There’s ingenious use of a small fridge, projecting the complementary images that a film would use for cutaways. However, these easy comparisons with film serve to reinforce how Evans’ story is bound up with the film world, and less easily adjusted to theatre.

With a source material as rich as this, Evans’ story begs to be told and rapturously heard, and proves sturdy enough to support the mixture of live and recorded imagery on the stage. However, the visual elements form an interesting accompaniment rather than a vital aid to the story, and the emphasis on voice indicates that the tale would stand up just as well through Evans’ audiobook.