This surprising and dynamic new production, with its exploration of power and hubris, couldn't come at a more opportune time

Majestic collonades and a raised statue of a lion attacking a horse, a Roman symbol of elected government, form the simple, striking set for the opening acts of Angus Jackson’s compelling new production of Julius Caesar. Andrew Woodall’s Caesar, tall, rangy and patrician, pumped up after triumphant battle with Pompey, looms over his adoring subjects while Brutus and Cassius mither and fret on the fringes: ‘Th’ abuse of greatness is when it disjoins / Remorse from power.’

In fact these two make for unlikely conspirators, more closely resembling peevish, put-upon clerks complaining of their manager’s untenable demands than stately senators with a taste for regicide. Counterintuitive though this casting is, the everyman appeal grows on you. As the cheers of the people rise up in the background, Martin Hutson’s Cassius moans and mopes, his face crumpled with anxiety, as he attempts to enjoin Alex Waldmann’s ponderous and prevaricating Brutus to the cause.

James Corrigan, in what was perhaps a stab at abject resignation, instead gives us a surprisingly relaxed and matter of fact Mark Antony as he stands over the deposed leader’s body and invites the co-conspirators to strike him down. His portrayal grows in intensity and stature, however, evincing knowing laughter from the audience as he dissimulates and manipulates, skilfully rousing the rabbling crowd into acts of vengeance. Eventually we see him morph into a furious figure capable of doing terrible violence to even children. Corrigan, rugged and charming, captures the duality of a man who must martial language as strategically as he martials his troops.

By Act 4 Anthony and Brutus are at war and de Bella’s Lion Attacking a Horse, a symbol of nobility and justice (despite itself being unjustly pilfered by the Romans) has been removed. Thus are we plunged deeper into the thematically ambiguous world of the play. The alliance between Cassius and Brutus is beginning to fracture and behind the collapsed colonnades the clouds bruise and the sky weeps blood.

Terry King offers us a disappointingly tokenistic battle scene but there is a moment of true unanticipated horror at the end of the fighting when Lucius (Brutus’ boy servant, played endearingly by Samuel Little) is chased down and swiftly dispatched with a brutal and audible snap to the neck. There is a collective gasp from the audience as the young boy drops like a ragdoll to the floor. This is the sharpest shock I have ever received in the theatre and I admit to feeling a (plainly silly) sense of relief when he reappeared, very much alive, at the roll call. Terry King still holds the rare ability to conjure theatrical magic. 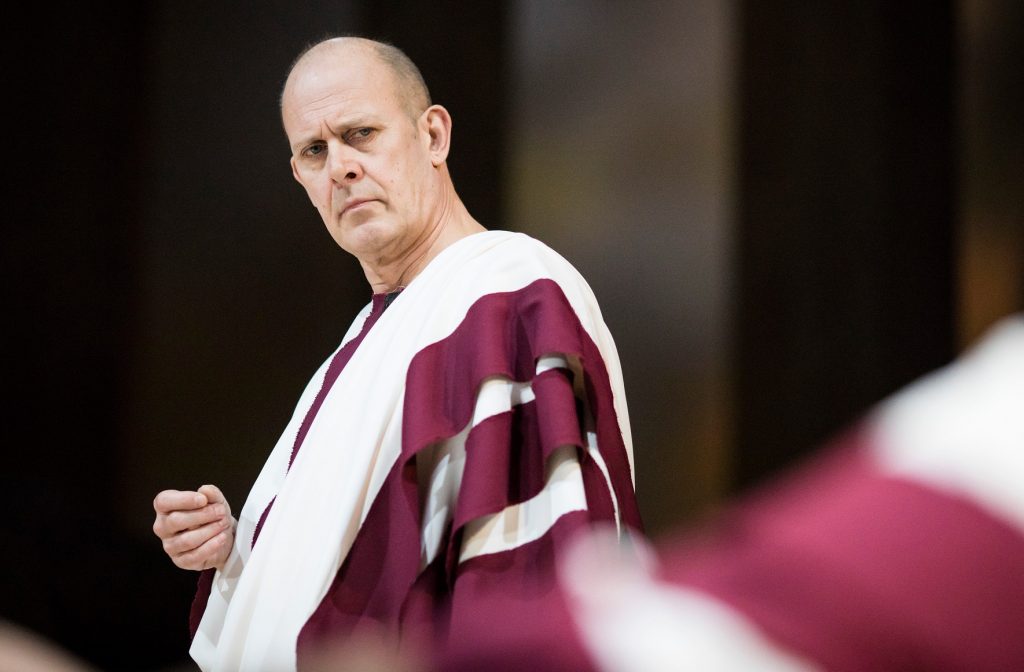 Another magician may be found in lighting designer Tim Mitchell, who hypnotises with an ever-fluid sky that makes eloquent the unspoken and sometimes the unspeakable.

The power of this performance lies in the principle of the phalanx, a formation in which Roman soldiers interlocked their shields: no one performance stands out, but it holds together by the strength of its parts. If Antony and Cleopatra is more about overweening pride and political hubris than anything else then, as Donald Trump kicks off his shoes and stretches his legs beneath a certain desk, this production couldn’t be better timed.

Writer, journalist and PhD candidate. Has fingers in more pies than he knows what to do with...