Review of: Years of Sunlight at Theatre503

Lisa Spirling’s new tenure as Artistic Director at Theatre503 is an exciting change of gear for the venue. While Paul Robinson invariably brought in some fantastic performers, writers and concepts, a theatre promoting new writing wouldn’t be doing itself justice unless it sought new blood to take the reigns. Years of Sunlight had, therefore, perhaps bigger shoes to fill than most shows booked in – it would be, for pundits, a means of signalling that Spirling has hit the ground running in her creative decisions and perception of overall direction for the theatre.

From this angle, the show is a fantastic success. Years of Sunlight is the type of text with underlying commentary rarely spoken – one that considers the long term consequences of social policy, perceived from those that truly felt its impacts. Writer Michael McLean has pulled off the key balancing act here – the juxtaposition between political and personal and how this can change over the course of decades. He puts the narrative in rewind, skipping back through the years (aided by the endeavours of Designer Polly Sullivan, lighting from Joshua Pharo and sound from Elena PenaIn – project the typical kaleidoscope of moments from the past few decades), threading historical consequence through the characters themselves.

Our key protagonist here is Emlyn – a muted, often sullen and frequently joyless performance from Bryan Dick, portraying a boy dealing at first with being part of a Northern England overspill scheme, while later simply finding the means of surviving and making something work. He is transplanted to a different city, where he is defacto-raised by benevolent single mother Hazel, (Miranda Foster), in a nearly-constant optimistic and cheery role that, when necessary, is capable of showing the true emotional consequences of the play and its characters. The part of her son and Emlyn’s closest friend, later (or earlier), a deeply unsympathetic individual, is granted to Mark Rice-Oxley, a man first seeking to find some remedy for Emlyn’s issues but later simply running from both his former friend and mother by sailing away.

The plot is heavy, personal and, even when placed in rewind, actually relatively clear to follow – we are watching a decline in reverse, a tragedy chased back to its origin. Of course, there is no one person to blame – all are complicit in different ways. But one video projected onto a back wall towards the end of the show, entitled ‘Skelmersdale 1984′ reveals the simple truth – inefficient policy to blame – housing constructed quickly and without the proper support infrastructure for the community to flourish, leaving those like Emlyn without any form of guidance. 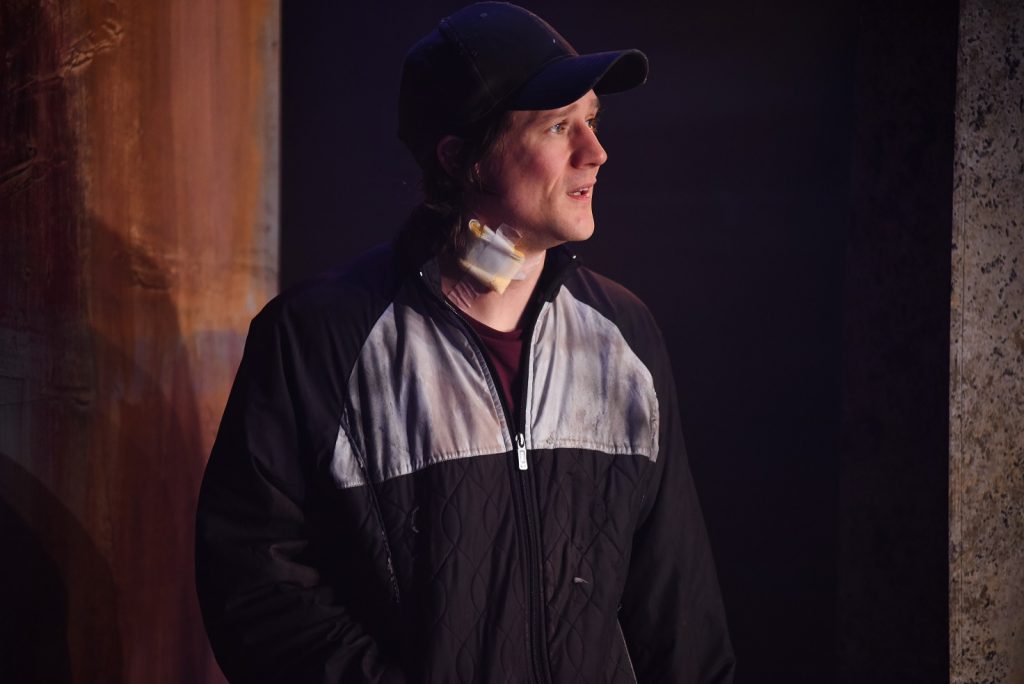 If there are to be faults with McLean it’s to find Hazel somewhat underwritten – never given her own chance to explain her optimism or love for this pseudo-son, meaning the emotional choice and ambiguity left at the end of the play is not as strongly placed as it could have been. Furthermore, the montages themselves (though clearly put in place to give actors time to change costume) sometimes felt overly long, losing some of the tempo and disrupting elements of tension and intrigue vital for the show’s weight.

We must, however, commend McLean and director Amelia Sears for realising what is an important story, and a perfect fit for the venue. Spirling has started with a show ready to pose difficult questions, a trend that will no doubt continue with Homecomings (plays written by individuals in or formerly in prisons) and further on with plays like Escape the Scaffold. Theatre503 may be looking at a stellar 2017.