A slow-moving story told of a woman's life through what she left behind, Hip is evocative and warm but never quite raises the dead.

Hip isn’t an easy show to categorise. Described as “semi-autobiographical” and “extra-live”, it might be said to closest resemble how a biography (or an autobiography) might translate onto the stage. This is storytelling more than it is theatre – and the story it tells is the one we weave of ourselves in the objects and ephemera we leave behind.

Hip charts performer and writer Jolie Booth’s discovery of a squat in 2002 previously belonging to Anne Clarke, a bohemian who lived there in the seventies until her death. Anne has left behind a tangible footprint of artefacts, documents, artwork and letters with which Booth begins to piece together a picture of her life. Pornographic cartoons draws on acetate. A recipe book for marijuana. A woman’s hip bone.

These, miraculously, are passed around the audience, read silently and aloud along with Booth’s own diaries which document her time living in a squat above Ann Summers. 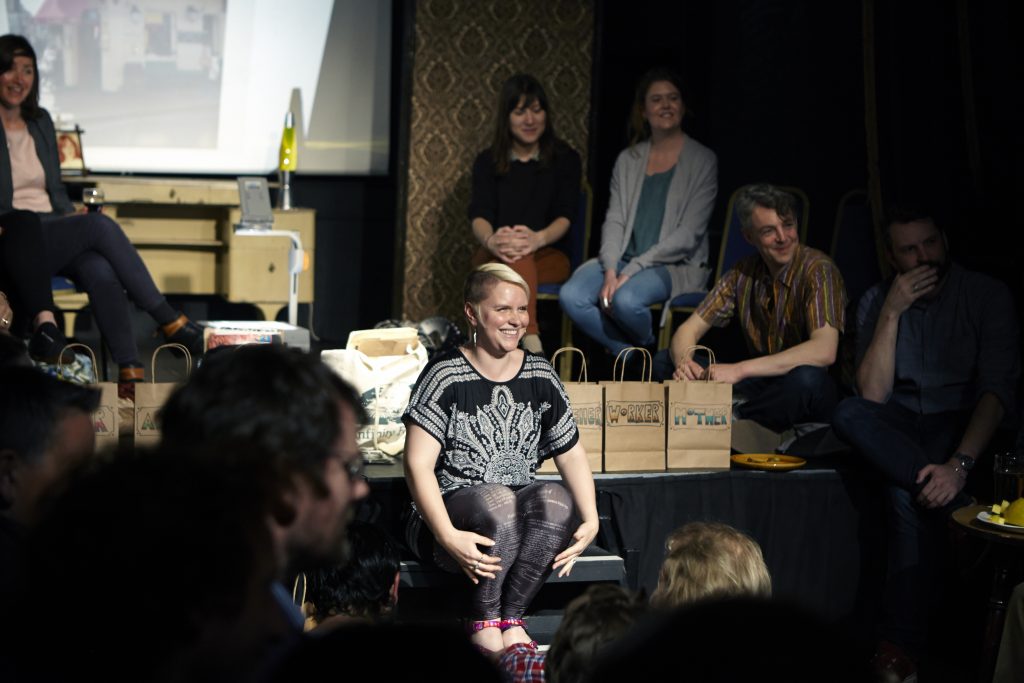 Booth’s depth of research is admirable. She has not only pieced together the biographical details of Anne’s life, but has followed the trail of human connections left behind by this vivid, lively woman. And, we feel, in doing so she has forged connections of her own. This is where this show comes in – it is the next step on that journey. The atmosphere created is somewhere between a seance and a wake. It is a witnessing of someone’s life and, at times, it is quietly touching. But it does not quite raise the dead.

Booth, quite rightly, describes Anne as a “kaleidoscope” of “conflicting extremes”. But within an hour sometimes we struggle to imaginatively invest in this ghost, and the show is perhaps most successful at demonstrating the difficulty of understanding anyone’s life within an hour (less, when we include the added details of Booth’s biography and storytelling). What is evoked is a nostalgia for a life you have not lived – Booth’s for Anne Clarke’s, and the audience for a time when houses were merely houses and not properties, and when an empty one could be put to use. Hip has a subtle social message, which comes to the fore near the close of the show as Booth reminds us that the South East contains 10,000 homeless people – and 20,000 empty homes. The erasure of our ephemera as these homes become houses and tenants are moved on denies to us our appreciation of houses as the backdrops to stories. Watching Hip, one can’t help but feel that our societal empathy would be stronger if we remembered this.

Hip doesn’t quite create the communal experience it craves, but comes close – and that’s not just the tequila-fuelled finale talking. It is warm and sweet, but the impression it leaves behind is more of a fingerprint than a winestain.

Hip runs until the 5th February at the Vaults Festival. Buy tickets here.