Review of: Travesties at the Apollo Theatre

Revival of Tom Stoppard's playful 1974 has some great moments - but ultimately feels stuffy and irrelevant. 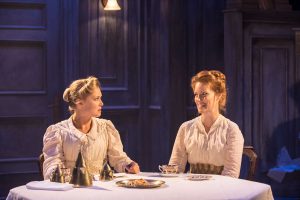 Amy Morgan and Clare Foster in Travesties at the Apollo Theatre

Travesties by Tom Stoppard has recently transferred from the Menier Chocolate Factory to the Apollo Theatre in the West End.

Like much of Tom Stoppard’s work, Travesties is unapologetically high-brow; frequent forays into grandiloquent wordplay and a basic knowledge of European history are an entry requirement for all audience members.

The story centres on the conceit that Lenin, James Joyce, and the founder of Dadaism, Tristan Tzara, all lived in Zurich in 1917. This play imagines that they might have met, been friends or enemies, and shared a joke or even a romantic interest. It’s told through the eyes of Henry Carr, introduced here as an old man reminiscing about his time in Zurich. This gives the play lots of artistic license, as Carr is not a particularly reliable narrator.

The real-life Henry Carr did work for the British consul in Zurich (although in the memory we see, he’s promoted himself), and in that time appeared in a production of The Importance of Being Earnest, of which James Joyce was the company manager. Joyce and Carr had a disagreement after the play, which led to each suing the other over costs incurred during rehearsal (Carr spent a lot of money on trousers).

This play – Henry’s ‘memories’ – therefore incorporate various elements of Earnest into the plot – he impersonates Tristan Tzara in order to woo a librarian, whilst Tzara himself pretends to be his own brother for the same purpose. You get the idea.

There are scenes entirely in rhyme, or in song. Lenin appears as a two-dimensional character – entirely as he would be in posters, or history books. At one stage Carr admits ‘I only ever saw him in the tea houses’ – hence the woolly, fictionalised portrayal.

There’s a lot of fun to be had throughout. Joyce’s entire opening scene in limericks is hilarious, and the primmer-than-thou duet during which the girls discover the boys’ deception is played perfectly.

My criticism of the show is that the whole thing feels stuffy, like one long, overly-academic joke. If this play is aimed at the older generation, then maybe it hits the mark with it’s skewed take on reminiscence, and the fun to be had embellishing the interesting bits of your own life story. However, there seems to be little of relevance to those of a younger age. I was frustrated that the main idea of the show is to make fun of these three important figures; in this centenary year of the Russian revolution, I would be more interested in a serious drama about Lenin, Joyce and Tzara, rather than this one which tries so hard to make a joke out of everything. It’s like sitting in an old man’s mind for the whole evening.

This is a transfer from the Menier Chocolate Factory. In that intimate setting, I imagine it really felt like you are really in the drawing room with these huge personalities – up close and personal with the greats – or at least as Henry Carr perceived them!

Here on the bigger West End stage, it could not feel more forced.