Review of: Salome at Hoxton Hall

Salome is billed as Oscar Wilde’s most debauched play – so extravagant, in fact, that it remained banned for several decades

Salome is billed as Oscar Wilde’s most debauched play – so extravagant, in fact, that it remained banned for several decades while mired in controversy. It is no surprise, therefore, that it was a tempting opportunity for Theatre Lab Company to interpret (now in their fifth iteration of the production), and this temptation ripples through every element of the show.

Indeed, lust and want are intrinsic to the plot here – Salome (Denise Moreno), the young princess of Herodias, is instantly seduced by the sight of Iokanaan, (Matthew Wade, in a costume that looks like something of a cross between  Zardoz and Aquaman) just as Salome’s adopted father, King Herod, is seduced by the sexual prospect of his stepdaughter, who he holds as an object of desire. Even the Young Syrian, Beniot Gouttenoire, is defined by his equivalent lust for the central girl. What is more, by the end of the play none of these desires are resolved, only affirmed and to some extent shown to be deeply destructive – a fascinating narrative to interpret and, as expected, a Wilde text packed with nuance.

Hoxton Hall’s chasm-esque stage makes one feel almost at the bottom of some great pit, surrounded by a context of debauchery and ill-grace, entirely in keeping with the tone of the piece. The final scene, with some characters perched on high, made this effect even more pronounced – some fantastic blocking from director Anastasia Revi. 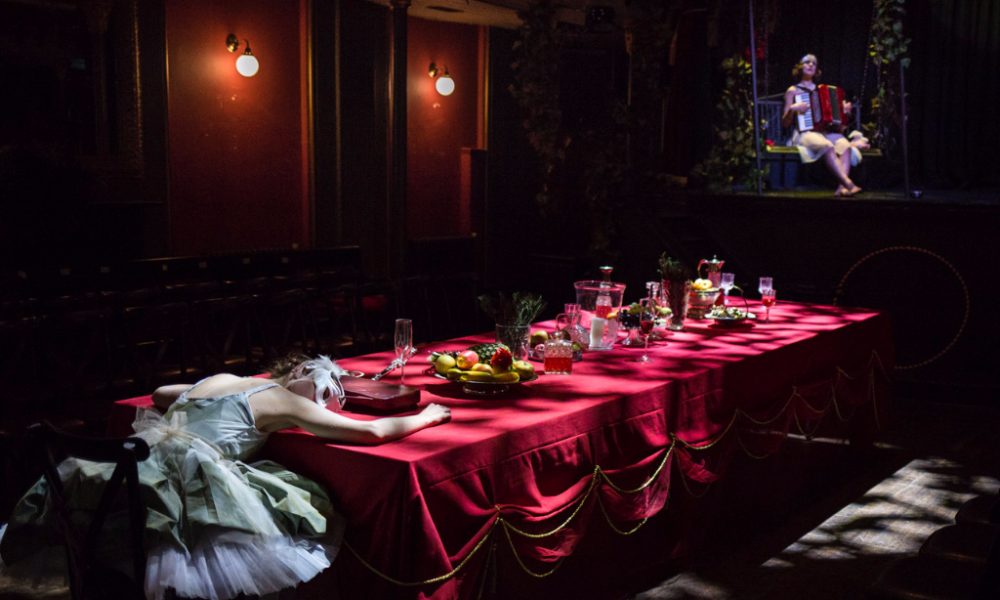 Despite this, a few key issues remained with the performance. For one, the acting was loaded with extravagance, every reaction and line dialled up to 11. Certainly, in keeping with a text packed with hyperbole, it nevertheless quenched any opportunity to relate, sympathise or empathise with the issues facing the characters, particularly during the final, extensive, monologue. Revi has, to some extent, been seduced by the flare of both text and her own visuals – every moment played for the aesthetic as opposed to the intrinsic. This was the case in one central scene with Moreno, playfully spinning a hula to emphasise her own childish nature, or later, when a fruit is quite emphatically consumed (as if the sexual context was not explicit enough).

Another jarring issue came with the lighting, snap cuts jerking one from the scene at regular moments, rather than providing soft transitions (key for an immersive staging, where the audience should be delicately guided in their attentions.

On the acting side Moreno acquitted herself with ease, toying between calculation and childish innocence with ease. The rest of the cast, while certainly energetic, were often victims of this intense form of overacting – never able to pack nuance into their roles. Nevertheless, the opportunity to see the text performed in such a space was a memorable one, and its connotations will certainly last beyond the theatre’s door.