As School Play launches at the Southwark Playhouse, we chatted to actor Oliver Dench about his role in the play.

1) It’s fair to say that this is a turbulent time for the British education system – why do you think a show about primary schools is so pertinent?

Everyone I know in the UK has a vested interest. Some of them have children in school right now. I’m about 80% sure that they all actually attended a primary school themselves. Quite a lot of attention is given to tertiary education – and rightly so, issues with fees and university courses can change a lot of lives. But due time should also be given to the other steps in our education system.

While we were rehearsing I saw a campaign of advertisements go up all through the tubes, encouraging people to go into teaching. I thought it was tragic that such incentives need to be found. Teaching is such a fantastic profession, completely necessary, and it currently seems to be a thankless task. We should be valuing our teachers equally with the good they do in the world – there’s no doubt it’s bottomless. It’s clear with the rocky time the world is going through politically that this is a time in which we mustn’t lose sight of what really matters in a society. Health. Education. Right now is a perfect time for this play. 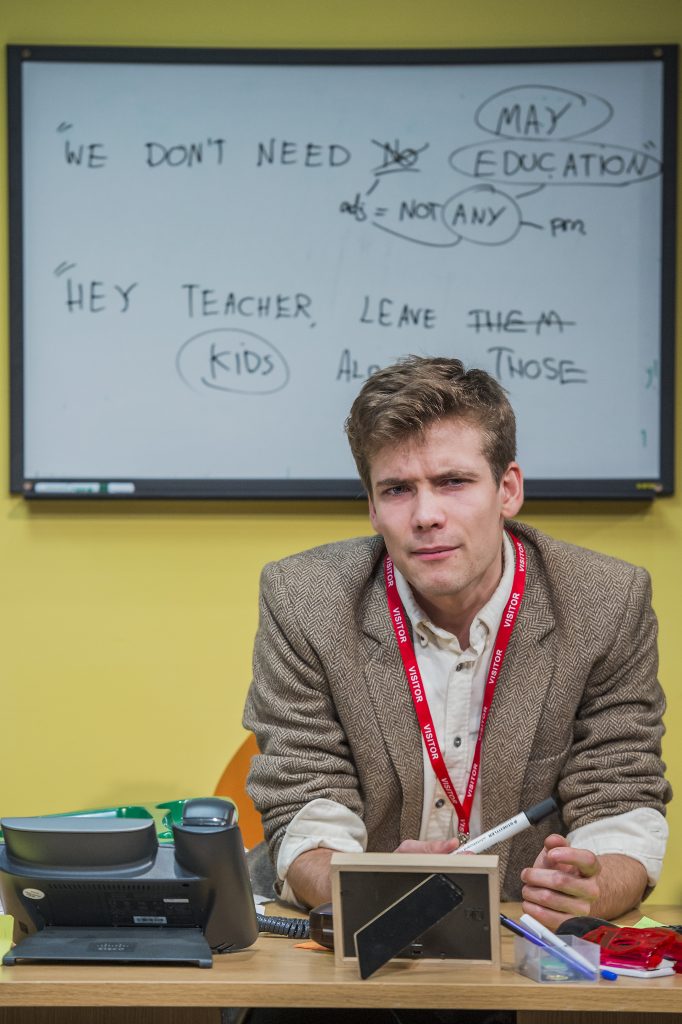 School Play – Independent production company antic | face presents a drama set against the backdrop of an education system in turmoil. Alex MacKeith’s debut play asks what it means to be a primary school teacher in contemporary Britain. It is being put on in association with Nik Holttum Productions at the Southwark Playhouse from 1-25 Feb 2017. The cast includes: Oliver Dench, Fola Evans-Akingbola, Gemma Fray, Kevin Howarth, Vida King and Ann Ogbomo. It is directed by Charlie Parham and supported by the Arts Council. Guy Bell, 07771 786236, guy@gbphotos.com

2) Did you learn anything pressing or striking as a result of rehearsing and studying the show’s themes?

Did you know that over 90% of students at state schools in the UK are under the age of 18?

But seriously, something I’ve learned over the course of this play is that real issues don’t always make fantastic soundbites. There are plenty of quotable plays about education, that are perhaps slightly guilty of oversimplifying the matter. Alex’s writing confronts these issues in a very real way – showing them for the many faceted gemstones they are.

I used to really enjoy plays that made great, sweeping comments on the education system. I was a real idealist. I loved the idea of education for education’s sake, why test us, learn what you want, blah blah blah. Looking into this play has made me realise that all idealism must be tempered with realism. Otherwise it’s simply not helpful. And in terms of pressing things – any education system not being as perfect as possible is pressing, right? There are children growing up in that system. We must think of the children.

3) Plays like Love at the National have rekindled an idea in British theatre regarding examining and studying government policy and social effects of these new policy ideas – do you think these can trigger important and tangible change?

Absolutely. I don’t think I’d be as interested in the art form as I am if I didn’t think so. There can be surely no doubt that art excels at inspiring public thought, and breathing life into debate. Performances arts like Theatre allow issues to be explored on stage in front of a receptive audience’s eyes, provoking introspection and interest into those subjects.

Real change, Important and tangible change (as you phrased it), takes a lot of different aspects. It needs legislators, debaters, politicians, movers and shakers. There are so many parts of change that, surprising as it seems, don’t take place in the rehearsal room, nor during a performance. But every movement starts with thought, and nothing spreads thoughts like art.

4) The show is based on Alex Mackeith’s own time in the education system and tutoring – how do you think this comes across in the script?

I play a character called Tom in the play – an Oxbridge alumnus working as a private tutor in a primary school. Whether this has any parallels to Alex MacKeith, an Oxbridge alumnus with experience working as a private tutor in primary schools, I don’t think anyone could truly say. But the realism of the play, and the complete frankness with which the issues affecting a primary school are tackled simply glows with experience. I don’t think someone would have been able to right such a very real play without the same level of experience.

What I think is really fantastic and commendable is the skill with which Alex has explored so many different viewpoints into the issue. It would be comparably easy to take one’s experience, come out with a single understanding with the issue, and write a play in which the characters rather didactically chat about that single viewpoint. Alex’s characters, so wonderfully unique and real, all come at the issue from different starting points, something that will hopefully leave the audience debating. And clapping, ideally.

5) How important was the idea of creating an authenticity in the characters and circumstances – and how do you think you achieved this?

For this piece, authenticity was absolutely necessary. I think it’s about matching the style to the play. Of course we could be doing a shockingly stylised piece, filled with gestic outrageousness and a shocking lack of authenticity. There is a lot of fantastic work out there that has that style. Trying to do it with this play would be like trying to fit an octopus into a cardigan. There aren’t enough arms. Plus, the cardigan isn’t made for… I’m going off track with that simile.

The play is natural. The play is authentic. It’s also designed to be a very real slice of life, a look into the mysterious headteachers office – a place that I’d wager few of us have been since we grew out of getting told off for eating in lessons. It’s an interesting world, that few adults get to experience. Authenticity serves that – allows us to be a real window into another life.

In terms of how we achieved it, I’m certain everyone had a different route. I’m sure all of us as actors spent a lot of time researching, and talking to anyone we could that had comparable experience in what we were trying to portray. The set design is certainly beautifully executed, and the Director very tender, in a way that allows us to be very real within the space. In terms of my personal process? I tend to thrash myself with birch twigs while praying to Dionysus. I’m not claiming that he’s watching over me or anything but it’s been working so far, so I’m not stopping it.

6) As an actor how has this show compared with some of your other work in a more Shakespearean context?

It’s shorter, as a rule. It’s no four hour epic, like the plays for which the Jacobeans tended to have a taste. In fact, now that I’m thinking of comparing it, Shakespeare has a lot in common with the Shockingly Stylised pieces that I mentioned before. Yes, he had an incredible way of writing remarkably real characters (for the most part), but it’s a shocking blow to learn that they’re not realistic in form. As much as I’d love to believe people were strutting around in the 17th century speaking in blank verse, I suspect they weren’t.

And those that spoke in only ever meter

In those days, if indeed there ever were,

I do suspect were just pretentious swans

Are as pretentious as the ones before.

The realism is a wonderful thing for me to explore. The vast majority of my work so far has been rather more poetic in style, it’s been supremely interesting to delve into a real, modern character, with whom I have so much in common, and so much more to learn. It seems like a completely different process to make a real person live when you’re less concerned with making sure the rhythm of the language shines through.

It’s also a completely different experience for and expectation from an audience. If someone is coming to see Romeo and Juliet, they might have preconceptions on how you might handle your Mercutio. When the writing is new, that’s all thrown out of the window. It’s a different thing to tell a story to an audience that has no idea how it ends. How bloody exciting.

School Play runs until February 25th – you can check out the link here.