Review of: Murder, Margaret and Me

Murder, Margaret and Me explores the imagined friendship between Queen of Crime writing Agatha Christie and dame of theatre Margaret Rutherford.

Directed by Damian Cruden, this play explores the relationship between Queen of Crime writing Agatha Christie (Nichola McAuliffe) and dame of theatre Margaret Rutherford (Susie Blake), who embodied Miss Marple on screen during the early 1960s. They are joined by a third female character, The Spinster (Andrina Carroll), who glides seamlessly between the two, unobtrusively encouraging, interfering, and nurturing them, in a sweet evocation of Miss Marple’s gentle persistence. It is highly refreshing to see these two powerful septuagenarian women in the spotlight. The Miss Marple films, that brought them together, were at the time the UK’s biggest film franchise within a highly male-dominated industry. Writer Philip Meeks takes Rutherford and Christie’s initial, rather uncomfortable meeting, during a press call for one of the Miss Marple films, as the springboard for imagining what would happen had a deeper relationship developed between the two and a friendship blossomed that led to a stronger connection based on truth.

Susie Blake (Victoria Wood: As Seen on TV) captures Margaret Rutherford’s idiosyncratic mannerisms to perfection, in an uncannily realistic evocation of her ungainliness, unfettered joie de vivre and all-round silliness. It can often prove challenging to combine an impersonation of a known figure with brilliant acting, but Susie Blake presents a perfect embodiment of this larger than life character and, like Rutherford, can switch from bumbling hilarity to deep sadness in a millisecond.

Nichola McAuliffe (Surgical Spirit) plays a wonderfully self-sufficient, restrained and acerbic Agatha Christie, portraying the great depths of her supressed pain, while Andrina Carroll (The Railway Children) presents a wonderfully sprightly Miss Marple, observing the slightest detail with a twinkle in her eye and, often a silent but reassuring presence, providing a welcome foil to the more vivacious characters.

There are a multitude of props, and the stage resembles a film set a constantly changing film set, with figures in overalls bustling about as part of the action, helping to build the story before our eyes as it unfolds. The location is constantly changing and the actors appear to move through the set in a continual, seamless dance, like a perfectly choreographed waltz. Murder, Margaret and Me forms part of a year-long programme put together by an all-female panel with the aim of redressing the imbalance in women’s roles in theatre, and designer Dawn Allsopp, Lighting Designer Prema Mehta and Sound Designer Yvonne Gilbert have helped to create a wonderful theatrical experience that perfectly and intelligently matches the needs of the production. 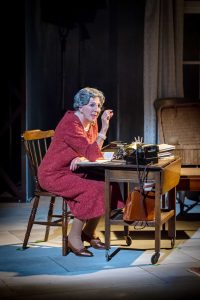 People of all ages seemed to enjoy the play, but a familiarity with the work and life of both Christie and Rutherford would perhaps deepen the references and the humour. This is also quite a wordy play, with lots of sitting down acting, but the energy and gradual unfolding of the secrets remain energetic and engaging throughout, and the whole production is highly amusing, touching and unpredictable. Close to the beginning, we are promised an evening that will be “part enchantment, part investigation” and this promise is certainly kept, although there remains a sense that there is another story to be told, something else lying underneath, as the facts blur into fiction in this hugely enjoyable evening.

Murder, Margaret and Me will continue its run at York Theatre Royal till 4th March at 7.30pm every day except Sundays and Mondays. You can book your tickets by ringing 01904 623568 or http://www.yorktheatreroyal.co.uk