Artistic Directors of LipService Theatre Maggie Fox & Sue Ryding are the starring comedy duo in this show of jumbled up literary plots and they compliment each other well. The show opens with an author in the present day who transitions between playing herself and classic women writers, Daphne Du Maurier, Elizabeth Gaskell and Jane Austen with some silhouette portrayals on screen of other female writers making an appearance. It is largely through the interactions the author and Jane Austen have between the book characters, in particular Mr Darcy, that we learn how he came to lose the plot. 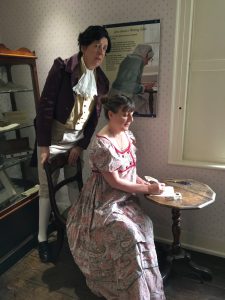 Mr Darcy’s character is written on stage before your eyes and the humour largely lies within the aggrievement felt by Mr Darcy as he battles against the narrative set by his author. I was rather taken by the quaint set which was filled with screens and cushioned seating blocks made from patterned quilts. The quilts I later discovered were partly contributed by attending audience members throughout their tour who had handmade some square patches for the backdrop; a lovely way to engage the audience. There was good use of interactive multimedia, particularly in the ballroom dancing scene which was choreographed with precision and timed well with the actors on stage. Another good use was during a send up of the famous lake scene in the BBC adaptation of Pride and Prejudice; both moments are very funny and will be appreciated by Austen fans I am sure. Fox and Ryding were at their most silly by amusing the audience as the Bennett sisters using body puppets beneath their own heads, reminding me of the Bronte sisters sketch in the Sky Arts series Psychobitches. 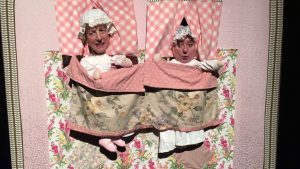 The cross over of stories worked well and gave a good platform to meet other character. A special mention has to go to the Mrs De Winter character from Du Maurier’s Rebecca who brilliantly captured the melodramatics of Joan Fontaine in Hitchcock’s film version with such hilarity. There were moments in scenes which at times felt overplayed for laughs, particularly with the heavy use of one liners and puns; the Basil Brush impression did feel a bit dated and made me cringe a little but overall there is enough variety in the humour to tickle the funny bones of literature lovers.

Mr Darcy Loses The Plot will be continuing it’s run at the Theatre Royal in Winchester on Thursday 9th and Friday 10th March at 7.30pm. You can book tickets from their website http://www.theatreroyalwinchester.co.uk/mr-darcy-loses-the-plot/ or through their box office on 01962 840 440


Written and Performed by Maggie Fox and Sue Ryding