An affecting story of the battles of loneliness, love and regret in the memory of one woman, told through the highly-expressive hands of two dancers.

Having seen the expressive power of hands in Thomas Monckton’s Only Bones earlier this week, it feels appropriate for our final review of the London Mime Festival 2017 to see these “masters of illusion” finally take centre stage. In Charleroi Danses’ Kiss & Cry, two pairs of hands tell the story of a series of love affairs – stories which speak volumes of love, loneliness, isolation and alienation.

“Centre Stage” might, in this case, be somewhat of a misnomer. It would suggest that Kiss & Cry is low-tech and minimalist in its approach, when it might be the most ambitious production of this year’s festival. These dexterous digit-dancers are often, in fact, nowhere near centre stage – in fact, sometimes they cannot be seen at all. For Kiss & Cry is not only a dance show solely featuring hands (and, briefly, one foot), but it is also a film created live for us, projected on a macro scale onto the back wall. A dolly track runs the length of the stage, not unlike the train track that Gisèle, the play’s protagonist, waits alongside for our first love to return. As well as two dancers, the production features onstage a cameraman and camera assistant, plus several technicians and lighting operators. Watching them create the stunning microscopic scenery live is like watching the work of an orchestra – complete with a conductor synchronising the actions of grip, technical operation and performers. The greatest joys to be found in Kiss & Cry are in simultaneously watching the homemade effects and the extraordinary spectacles they produce. A steadicam camera rotated inside a slowly-spinning doll’s house room creates a nightmarish vision of furniture with a life of its own. Elsewhere, a hand clutches for a tutu in a flooding bathroom.

Kiss & Cry has a synedochic structure and style. Hands substitute the expression of a complete body, and fragments of a story express the whole. We are triply estranged from Gisèle – both in terms of her representation on screen, her place within the story itself, and further in the all-bared aesthetic, where we can see the construction of her life by a team of master professionals. This is dizzying to think too hard about, and feels dreamt up by the mind of an arch-absurdist like Charlie Kaufman. As a whole, it speaks strongly of how we relate, and often fail to – to the stories of others and to the stories of ourselves. I would argue that this piece is as much about failed connection – hands failing to touch – as about love. 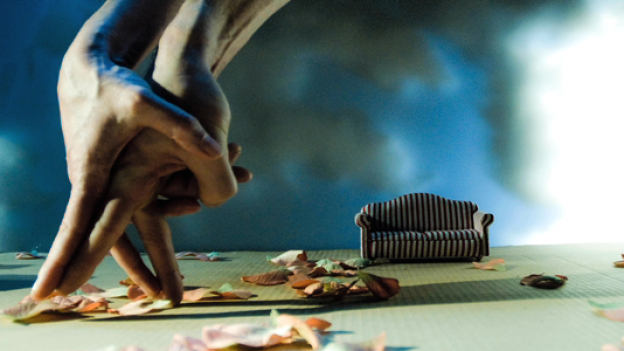 This aside, the camera undoubtedly brings out the minutiae of the mastery on display here from dancers Michèle Anne De May and Gregory Grosjean. In one particualrly memorable sequence, a hand swims, surfaces, and evolves from crawling creature to city catwalk within seconds. But it is in the duets between the two that Kiss & Cry really moves its audience. They show the ability of hands to waltz, tango, seduce, disco-dance and ice-skate. But more importantly, they infuse these actions with a surprising sensitivity and emotional weight. There are several duets of two hands in bed, but the simple action of one hand nestling into an unwilling other matches the most dazzling choreography for pure feeling.

It becomes easy to forget what it is you are actually watching – this is where, I expect, the aesthetic contributes in keeping us aware of the technical wizardry of performers and production team required. The world of Kiss & Cry is hand-built with extraordinary care – viewed as a whole it is impressive, but each tiny world is populated with beautiful miniaturised furniture, buildings and people. These small sets are incredibly designed – they have to be, held to the scrutiny of the screen.

However, this world can sometimes feel closed to us. The amount of equipment and design elements required to create the story means the performers themselves are often barely visible – which greatly reduces the effect of the juxtaposition between live and filmed experience. We can feel like a child left out at playtime – all the more creative children are huddled around their masterpiece, and we are not allowed in. Whilst waiting for the performance to start, the entire onstage team stood in a huddle, perhaps sharing final notes or game-plans. Touching as this image of camaraderie was, it resurfaced time and time again during the production as I felt excluded from the creative process. 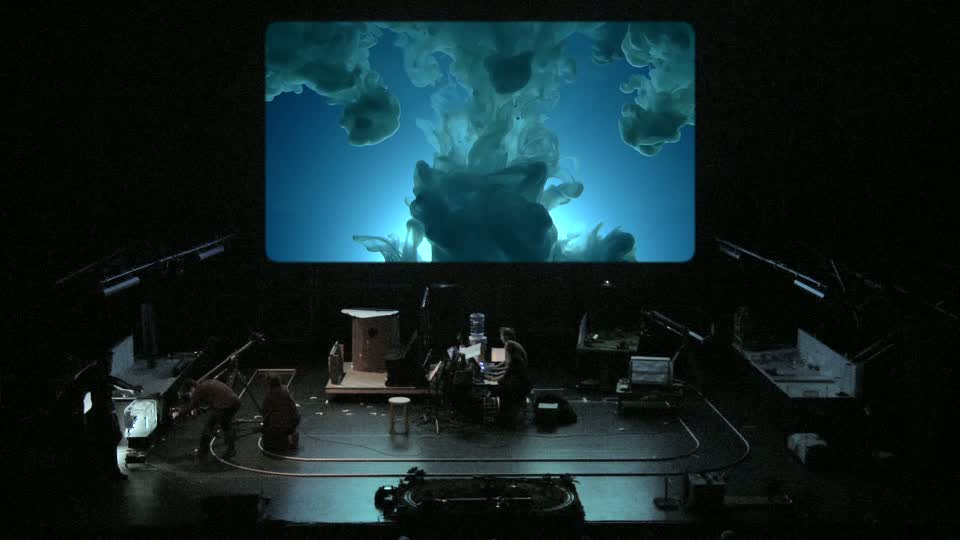 I understand that this was unlikely to be a creative choice, and was an unfortunate side-effect of the show’s ambition. The same could be said for the piece’s other primary weakness. Scene transitions were often seamless, but occasionally accompanied by footage which felt like filler – a train circling around a track endlessly, again, as the crew reset for the next set-piece. This interrupted deeper engagement with the story, which was conveyed through narration in Thomas Gunzig and Jaco Van Dormael’s refreshingly down-to-earth and fresh script. The banal mingled with the profound in lines such as “there are love affairs like cheese graters – great for cheese. Useless for everything else.”

My feelings of exclusion were not necessarily true throughout the piece – in fact, when Kiss & Cry shares the joy of its genius with its live audience, it shows it is capable of combining its onstage and projected creativity. It is these moments which shine in the memory. On one occasion, and by far not the most impressive with regards to choreography, a lone hand figure-skated. But it was the live reactions of the crew – clapping and cheering – which brought the joy of what Charleroi Danses was achieving to life. A duet to Jimmy Scott’s cover of Nothing Compares 2 U is unbeaten – until you tear your eyes from the screen, and see that what is projected is only part of the picture. What is filmed, live, is the actions of the hands at the peripheries of a tender dance between the two performers. This dramatic reversal of Kiss & Cry‘s focus, in the moment I discovered it, took my breath away. I was left with a powerful feeling of regret, that I had not given the artists of Kiss & Cry more attention.