Review of: Letters to Windsor House

Price:
from £10
Reviewed by: Emily Lunnon

Sh!t Theatre’s brilliantly satirical take on the housing crisis in London, Letters to Windsor House gives new life to the notion that the only way to deal with some problems is to laugh at them.

Becca and Louise live in the titular abode, an ex-council block in north London. Their landlord is exceptionally dodgy and their flat is best described as cheap and cheerful, despite the mouldy ceilings and pigeon-infested balcony. Delivered to the flat are a stream of letters, bills and junk mail, addressed to its multitude of former residents with no forwarding addresses. Rather than dispose of them, the flatmates begin to open the mail and try to piece together the stories of those who had called Windsor House home, developing real concern for some, resulting in persistent attempts to contact them. 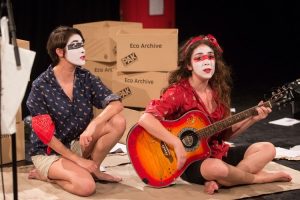 Alongside the comedic commentary of their investigations, with songs performed with the beautifully fringe-y use of a loop pedal, the pair present the huge issue of the gentrification of an area traditionally populated by council tenants. Although dealing with a serious issue, a large part of the humour of the piece comes from the video recordings made by the pair in advance. Becca and Louise go and view Woodberry Park’s new high-rise apartments, which set the owners back nearly half a million pounds for a one-bed flat, and are given a skewed representation of the area’s history by a well-meaning but horribly ignorant estate agent. Upon the discovery that they may also be living illegally, phone calls to the council to find out “hypothetically” what the consequences might be for them elicit laughter from the audience due to the hopelessness of the advice they are given.

Alongside this, Letters to Windsor House also gently teases out the difficulty of living in London for young people. Dressed as letter boxes, knowingly cheap cardboard creations, Becca and Louise read their letters to each other, descri 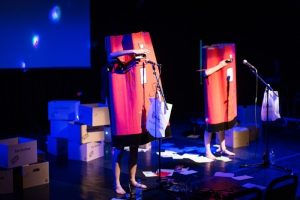 bing their difficulty with their living situation. Living together with friends is the only option, despite both needing their own space, and the threat of their flatmate moving out is a real problem. Despite their situation being better than those who occupy the less creatively constructed cardboard structures on the square of concrete below their building, their situation is not an easy one.

The performativity of the piece is a joy to watch. Self-depreciation and a warmth in both actors help the audience to buy into the style of the piece, with their Brechtian face-paint and and Pinteresque storytelling. The fourth wall is an alien term and we understand that Becca and Louise are really sharing their story with the audience, not just telling it to us.

It is unsurprising that Sh!t Theatre received a Fringe First award this year in Edinburgh for the piece. It exemplifies the quality of work produced on the fringe by artists with something important to say, whilst at the same time being incredibly entertaining and well-produced. On-the-nose political drama is one thing, but satire is a crucial way of talking about the world we live in, and Sh!t Theatre are doing it with style and aplomb.

Letters to Windsor House is running at the Soho Theatre at 7:15 until the 11th February. Tickets can be purchased on 020 7478 0100 or online at www.sohotheatre.com/whats-on/letters-to-windsor-house.
Written and performed by Rebecca Biscuit and Louise Mothersole