The Iron Man is very much a play of two parts – the titular character’s demonization by the villagers and friendship with a young boy for the first half an hour followed by a fight with a bat-angel-dragon-monster threatening to eat the earth – providing a awful lot of plot to get through in an hour. We zoom from plot-point to plot-point, guided erratically by a mixture of pre-recorded narration, dramatic sound effects and a type of watercolour stop-motion projected across the cyc at the back of the theatre. While the Unicorn does have a well-earned reputation for producing glorious children’s work, and while the story of this piece is exactly the sort of imaginative, thrill-laden romp that should chime with the venue’s intended audience, the mixture of techniques used to tell the story tended to muddy the already complicated plot and lessen any emotional impact the original book had. 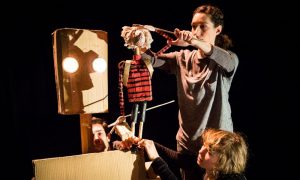 The Iron Man himself is portrayed using an ingenious variety of cardboard puppets, altering in size depending on what perspective Matthew Robbins wanted the audience to take. The Weston theatre has a tendency to feel rather cavernous, and this change in puppets sizes and therefore in the amount of the world we see provides an almost filmic view of proceedings. This also harks back to the original form taken by the story – the pictures on stage remind one of illustrations in those children’s books, angles, size and all. This sort of dislocation is only possible with nigh flawless puppetry, an feature in which the cast utterly triumphed – their manipulation of various cardboard figures seems almost effortless, their skill apparent. However, the main issue with the play is not with those performing it, but the general aesthetic. The design, puppets and projection feel like bits of a jigsaw which don’t quite fit – each beautiful in their own right, but not necessarily working together harmoniously for the good of the play.

The two and a half metre Iron Man falling over at the start of the piece might have completely captured the young audience – an audible scream was heard throughout the auditorium – but, as many of the other design choices, this dramatic felt as if it only unevenly actually fitted into the story the team were trying to tell. A unifying aesthetic was lacking – the cardboard Iron Man puppet had very little to do with the black-and-white stop motion playing across the back of the theatre, as well as the costumed angel-bat-dragon monster who came down from the star. This same monster was a live performer – the only one in the piece – setting ragged black material next to the now metal Iron Man, next to watercolour projection, festoons, colourful orbs hanging from the ceiling and the cardboard of the setpieces. All of these elements were individually spectacular, but the slightly odd conglomeration of all of them in one piece sadly detracted from any individual beauty, and muddied what would otherwise have been a fabulous production.