Scratchworks Theatre Company was established in Exeter in 2013 with the intent to create original stories and combine varying theatrical styles and disciplines. Now Associate Artists of The Bike Shed Theatre and recipients of the NSDF Award for ‘Best Overall Body of Creative Work’ at the Edinburgh Fringe 2013, they return to this year’s VAULT Festival with their latest touring production, Great Train Robbery, which uses inventive and intelligent physical theatre to create a zany musical adventure, partially depicting the ‘true story’ of the greatest heist of the Twentieth Century. 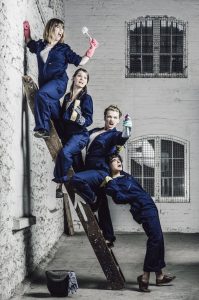 The date is August 1963 — in the dead of night, a gang of fifteen men hijacked a train en-route from Glasgow to London, and stole a sum total of £2.6 million pounds (which in today’s money would equate to approximately £40 million), the majority of which was never recovered. The crime gripped the nation, securing its inevitability for multiple cultural adaptations; in the past couple of years alone, British television has seen both the 2012 ITV series ‘Mrs Biggs’ and the 2013 two-part drama ‘The Great Train Robbery’, to commemorate the 50th anniversary of the heist. Instead of primarily focusing on the robbers or the officers attempting to catch them, Scratchworks Theatre Company invents an all-female clean-up crew, hired by the robbers to remove all evidence of their presence from their safe house, Leatherslade Farm. Cast members Laura Doble, Sian Keen, Alice Higginson and Hanora Kamen are Numbers 1, 2, 3 and 4 respectively; they are comedic archetypes rather than complexly developed characters, and this, plus their anonymity, allows for their hilarious plausibility in the story — too much detail would ruin the audience’s willingness to believe their story. When these characters eventually interact with the aforementioned robbers and police, also played by Kamen, Higginson, Doble and Keen, they are hyperbolised to excellent effect, highlighting their inadequacy in face of similarly unqualified criminals. Rapid costume changes, varied voices and physicality allows for clearly defined archetypes, which becomes a blessing when the multitude of characters interact in a flurry of chase sequences, demonstrating the sheer impressiveness of their performances. 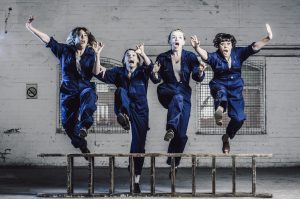 Great Train Robbery’s greatest strength, however, is its desire to use this historical incident in an intensely playful manner. Musical numbers are used throughout the production as narrative tools, for scene transitions and as familiar pop cultural references. Audience members are encouraged to participate in their shenanigans as an army of kazoo-wielding co-conspirators, blaring the Mission: Impossible Main Theme. Performers use their voices and bodies to emulate sound effects and objects with controlled rapidity, used to brilliant effect as Numbers 1, 2, 3 and 4 jump off an uncontrollable train. Doble, Keen, Higginson and Kamen are a well-oiled machine, their years of performing as a unit clearly evident as a multitude of props are exchanged with dizzying flourish. There are moments where one or two of the performers break out of character for a stifled chuckle, but this just increases the comedic effect of the show. For an audience to see its actors enjoy themselves in such a raucous manner is wondrously enjoyable. After all, watching an actor try not to corpse with a plait draped across their upper lip as they portray a moustachioed bombastic police officer most certainly adds to the fun.

Every year, the VAULT Festival showcases some of the more avant garde and experimental works that audiences do not get to regularly see in more mainstream spaces — it seems that it is easier to witness more varied theatrical productions underground than above. By taking such a dramatic historical event and finding intelligent and boisterous humour within it, Scratchworks has found a niche with which to have free reign. Just as the four cleaners run away with their share of the loot in Great Train Robbery, so do Scratchworks Theatre Company run off with the truth, stealing it in order to manipulate history with their comedic whims, and we are more than willing to let them.

Great Train Robbery will be continuing its run at the VAULT Festival until Sunday 12th February at 8.20pm, with a matinee on Saturday 11th at 3.35pm.