Review of: A Clockwork Orange

Alexandra Spencer-Jones and the Action To The World cast pulled off an incandescent performance, "real horrorshow", that needs to be seen to be believed.

When I saw that the Park Theatre were putting on A Clockwork Orange, I was intrigued; I had found the book fascinating, but didn’t feel like Stanley Kubrick’s version quite captured what it had meant to me. However, as press night drew near, I found the trepidation started to build – if handled incorrectly, the heavy themes and violence could render it more a feat of endurance than an evening of discovery. I needn’t have worried – Alexandra Spencer-Jones and the Action To The Word cast pulled off an incandescent performance, “real horrorshow”, that needs to be seen to be believed. 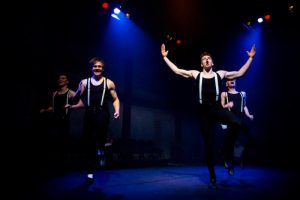 For those unfamiliar, A Clockwork Orange explores the life of little Alex and his companion droogs in the criminal underworld of Manchester – they are “ultraviolent” teenage hooligans, who fight the ennui of adolescence by indulging every violent whim, including brutal assault, rape and murder. The narrative is coloured by the slang created by Burgess, which is a mix of slavic and British; the group frequent a “moloko” (milk) bar, and partake in “dratsing” (fighting) and “fillying with devotchkas” (playing with women). After being imprisoned for his criminal acts, Alex is offered an experimental ‘cure,’ which, by associating violent (and sexual) feelings with extreme sickness, effectively removes his human agency. 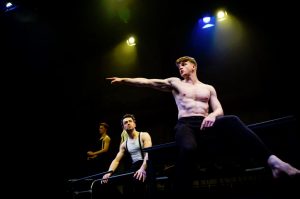 In Spencer-Jones’ production, the violence is very much present, but stylised with throbbing Beethoven/electro mixes and dance montages. Graphic attacks were tempered by the balletic grace of the performers. Instead of having to look away, which I had been anticipating, I was captivated. Razor edged choreography pays off to remarkable effect, and the air was thick with menace as the droogs flexed and grimaced from the arena. Spencer-Jones used this layout well, creating the impression that depravity dominates this world with the ever-writhing movement around the stage. Though key revelations from Alex tended to be communicated upwards towards the circle (where I was), I don’t imagine that this would have detracted too much from the other views.

Scenery and costume were minimal, but used to maximum effect; orange accessories for key characters stood out starkly in the otherwise black and white performance, with the immense physical theatre of the talented cast differentiating character changes. Milk was guzzled, and sloshed around the stage with glorious negligence. The cast themselves were all male, which brought the homo-erotica of the text to the fore, and, especially with the pounding music and frequency of nudity and gyrating dance. Female characters were signified, for the most part, with farcical but reductive mincing, which was initially funny but quickly became tired. 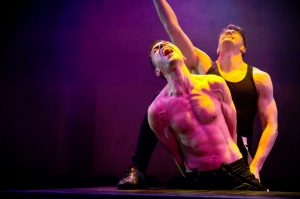 At the heart of all this, Jonno Davies gave an outstanding performance in the role of Alex DeLarge. His carefully crafted insanity electrifies, flickering between calm and unsettling to explosive and downright terrifying. We believe when his victims, and the other droogs, cower and submit to him, as he dominates the stage, seemingly in every corner at once. The transformation from street king to prison boy to lab rat is expertly handled, with the hulking body that was used to intimidate buckles into itself with unprecedented helplessness. Dare I say that I felt sorry for this monster?

There’s no denying that the cast were strong, with their dynamic delivery of character and powerful body language. However, the omission of any female actors from the cast is glaring, and, as I’ve been mulling it over for a few days now, has been the main thing that I took from the performance. I would have loved to have seen some female actors being given a chance to shock and intimidate as droogs, and can’t understand the artistic decision to exclude them. Do we really still think of women as too delicate for the most extreme roles, such as this? I think that this did unbalance an otherwise spectacular performance, but is not enough to stop me recommending far and wide.

A Clockwork Orange will be continuing its run at Park Theatre til 18th March. You can book your tickets from 020 7870 6876 or https://www.parktheatre.co.uk/whats-on/a-clockwork-orange