Review of: The Bear

A charming production that is filled with much warmth and imagination. It is a visual feast for all the family to enjoy.

Pins and Needles Productions describe themselves as a company with a “commitment to making inspiring visual theatre that is imaginative and playful; full of heart, humour and magic”. They certainly delivered that and much more with this magical adaptation by Zoe Squire and Emma Earle of Raymond Briggs’ The Bear. 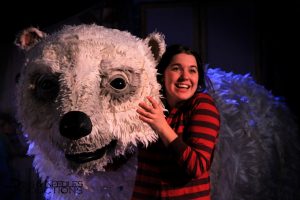 Many will be familiar with the classic picture book by Raymond Briggs called The Snowman and this story has a similar theme of a young child’s imaginary friends.  We meet Tilly (Lily Donovan) a bubbly and very sweet little girl who is delighted that a bear has climbed through her window to come and live with her but she ends up getting frustrated with the havoc and mess it causes.  The huge gasp from the audience when the polar bear first entered was a special moment of total awe mixed with apprehension and quite rightly so, for Samuel Wyer’s design of a larger than life puppet is simply breathtaking.  His creation is truly a work of art, made from a flexible 2 part frame of hoops lined with white fur and a pair of massive front paws all of which are largely controlled throughout the piece by Mum (Fiona Putnam) and Dad (Stephen Harper). I would intermittently watch my friend’s son Bruno who was mesmerized throughout but in particular by the polar bear who made him laugh and jump with surprise. He told me afterwards that he loved how the bear moved on stage which is a great testament to Finn Caldwell’s direction of the puppetry and the skill of the cast controlling and capturing the essence of it very realistically.

Scene transitions were well polished by Hal Chambers and Emma Earle’s direction; I was impressed with the simple yet imaginative use of the set and multi-purpose props that were brought to life with colourful lights and projections. The stunning folkloric music composed by Lucy Rivers gives this enchanting production a full sensory experience.  A bubble and snow machine captivated the young audience but I did think that better placement or additional machines would have given more children the chance to fully experience their effects.  It is a beautifully crafted show filled with much humour, tenderness and spectacular visuals and at 50minutes in length, it holds the attention of young ones brilliantly. 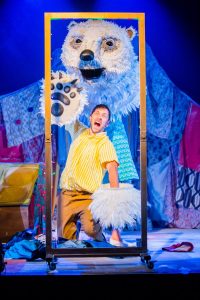 The Bear will be continuing its run at the Watermans Art Centre in Brentford Tuesday 14th February till Friday 17th February at 11:00 and 14:00. You can book your tickets from their website https://www.watermans.org.uk/events/the-bear-3-8yrs-beartastic-half-term/ or through their box office on 020 8232 1010