Review of: Wish List at the Royal Court Theatre

With brutally authentic performances portraying the harsh realities of many living and working in Britain today, 'Wish List' at the Royal Court Theatre is an excellent debut for 2015 Bruntwood Prize winner Katherine Soper.

With a surplus of aspiring playwrights hoping for their works to be produced in some of the capital’s most prestigious theatres, there is no greater chance for this dream to be achieved than with the Bruntwood Prize, a biennial competition which allows writers of any background and experience to submit an unperformed play for the chance to win part of a £40,000 prize fund, and the opportunity for further development with the Royal Exchange Theatre, Manchester. In 2015, newcomer Katherine Soper became the Prize’s fifth winner, and has now received a Royal Court Theatre transfer for her winning piece: Wish List, the story of Tamsin, a young woman who tries to look after her younger brother while struggling through a zero-hour contract in a not-so-subtle allusion to a certain online retailer. Soper handles these issues with delicate sensitivity, balancing both the brutal reality of their situation with intervals of light-heartedness and joviality, and with no invocation of a preaching tone — the play simply represents life in the day-to-day, and the Ouroborus cycle of frustrating setbacks and hardships that can occur for those attempting to cope with austerity Britain. 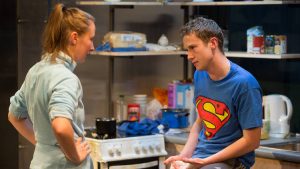 Although Wish List has four complex, fully-formed characters, this is primarily Tamsin’s story; played by Erin Doherty, we see woes through her eyes as she staggers from home to work and back again with the self-sacrificing determination to keep her family going, regardless of the relentless obstacles that are thrown in their path, whether from the government, her job, or from within the family itself. Though of course, the obstacles created by her brother Dean are in no way his fault: struggling with a severe form of OCD that prevents him from getting dressed, leaving the house, or even making a cup of tea without his set ‘rituals’, Tamsin fluctuates between encouragement, reprimands and apologies, knowing how best to communicate with Dean, but not always the best way in which to help him. Doherty breathes authenticity into the role, her speech littered with stammers, fillers and constant doubt — to hear her speak is to hear the voice of a real human being, something which theatre often shies away from, but here works beautifully. While such a socially relevant and crucial topic is being addressed, it demands a true voice that can express reality, and not an artistic interpretation. 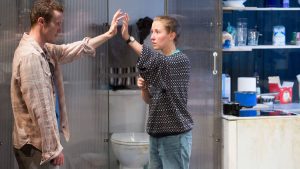 Where the play does allow for the odd step into fantasy, however, occurs mainly due to the incredible work of Designer Ana Inés Jabares Pita and Lighting Designer Ciarán Cunningham: scene changes occur in a flash, as we are jolted to and fro between home and work with conveyer belts and industrial machinery that are lowered and pulled into view, and which cleverly creep into the family space as props and set pieces throughout the play; in a rare moment of pure childish abandon, Tamsin re-creates Meatloaf’s ‘I’d Do Anything For Love  (But I Won’t Do That)’ as packing peanuts rain down from the sky and lights rage in a technicolour spectacular, all in an attempt to portray the true majesty of the song to her co-worker Luke. The combined efforts of Pita and Cunningham create such a force of kinetic energy that races to a pulsing narrative crescendo, it becomes such a shame when this is thwarted within the last ten minutes or so, as the inevitable crescendo is reached too soon. The moment itself is truly heart-rending, but once it is seen, the plot continues as relationships and character arcs are closed or paused as other issues take the foreground. To end on such a momentous dramatic moment would have made no narative sense, but the closing scenes dip in pace to the point of somewhat stalling the work that Soper, Pita and Cunningham had achieved wonderfully until this point.

At a time when many are feeling the strain of austerity, it is important for our cultural community to accurately represent that reality in order to invoke empathy and potential social change. For any to witness Wish List at the Royal Court Theatre, and not feel an unyielding grief for those forced to bear the weight of such financial difficulty, as well as those in need of medical and governmental assistance who are cruelly sidelined by a dispassionate bureaucracy — well then I am indeed incredibly sorry, for you have no soul. For a first play, this is exceptional work, and I shall be intrigued to see what Soper’s return to the stage will bring. In the meantime, the Bruntwood Prize has recently opened its submission window for this year, giving another round of hopefuls the chance for their work to be performed and appreciated (and scrutinised by critics). The deadline is 5th June 2017 at 6pm, so get writing — and who knows? Maybe your work will be this year’s winner, and appear on online review sites in the not-too-distant future.

Wish List will be continuing its run at the Royal Court Theatre until Saturday 11th February at 7.45pm, with Saturday matinee performances at 3pm.

There is no allocated seating for this production.